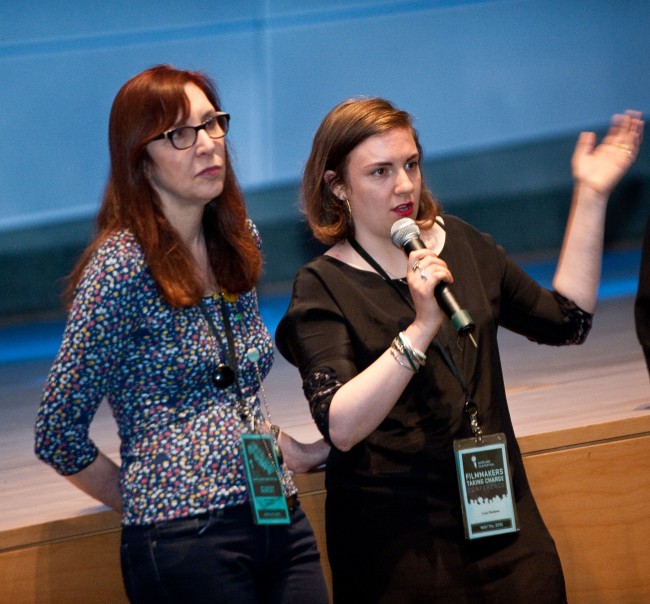 Girls star Lena Dunham has been all over the news this past week. She made headlines over the weekend for her (naked) appearance on Saturday Night Live, and as per usual, fans commended Dunham for her willingness to bare it all. Then again, Dunham is no stranger to nudity, and appears on her HBO hit Girls sans clothes in most episodes. Still on a high from the excitement of the weekend, Dunham made an inappropriate remark on twitter, but true to her feministic values, she quickly recanted the statement. However, the words she shared immediately after, display an extremely problematic point of view. Lena Dunham more or less said that although rape jokes are inappropriate, girls can make them.

To get a solid baseline of Dunham’s behavior around the subject of rape, it must be said that she has previously indicated her support for survivors of sexual violence. Recently Dunham urged twitter followers to read Dylan Farrow’s open letter to Woody Allen; she commented on the abuse survivor’s bravery in posting her story. It is clear that Dunham’s intention is not to add to the stigma that survivors face, but her recent comments are even more sad because of her good intentions; well-intentioned people (carrying around an ignorant point of view) can do a lot of damage.

Dunham has a large fan base; 1.45 million people follow her twitter account. This weekend 1.45 million people had the privilege of reading the following conversation. A fan commented on how Dunham’s nudity, and told her she does not need to always be naked. In response, Dunham tweeted that her uncle makes her.

Now hold off on the hysterics over that comment, because the pinnacle of inappropriateness has not been reached. While the world is entitled to feel angry about Dunham’s misstep, it must be said that her immediate response was to delete the previous tweet and apologize. She publicly recognized that her molestation joke was in poor taste.

The conversation should have ended there, and Dunham could have walked away with only a minor blemish on her record, but she had something else to say. According to Dunham, women have “a lot of joke flexibility.” Essentially, Dunham is saying that she understands that men should stay away from rape jokes, but stating that girls can make them without apology.

Again, this is not about staining the good name of Lena Dunham, but this is about a larger issue. Dunham has brought up a great example of why rape culture persists. To clear up this matter, here is the truth: no one should be making rape jokes. This is not rocket science, kids. There is no such thing as “joke flexibility.” This is what the reality is, at least a quarter million reports of sexual violence are made in the US each year, and while most of them are made by women, a percentage of them are made by men. No, it is not okay for men or women to make rape jokes. And, to claim that women have flexibility seems like a dig on men, which disregards hundreds of thousands of male victims of sexual violence.

Yes, comedy can push the borders of what is funny and what is not. Is rape ever funny? No. Have comedians ever successfully made rape jokes that fall low on the spectrum of offensiveness? Probably. The goal of this article is not to make it okay for anyone to make rape jokes, but it should be clarified that the predominantly harmful rape jokes can be identified as the ones that are at the expense of the victim. For example, Dunham’s initial tweet; she is tweeting as if she is being molested by her uncle. That is an example of a joke at the expense of the victim. Most rape jokes use that formula.

No, this is not an invitation for comedians (or people who think they are comedians) to go out and construct a “fair” rape joke. But it should be identified and acknowledged that most jokes on the subject of rape are ultimately offensive and in poor taste. The unfortunate added bonus of how rape jokes are made in this culture is that many people do not acknowledge that rape jokes are in bad taste. At least when people make jokes about AIDS or cancer patients or dead babies, they realize they are saying something that is in poor taste. Perhaps the most problematic thing about rape jokes is that they are almost always made casually. But obviously that is completely unrelated to the fact that rape is underreported and victims in this country are often treated poorly, right?

Lena Dunham is one of several female celebrities with the power to impact the unfortunate rape culture of the US. Unfortunately, the Girls star leaves something to be desired in her discussions of womanhood. Contrary to what Dunham says, it is not okay for women to make rape jokes.