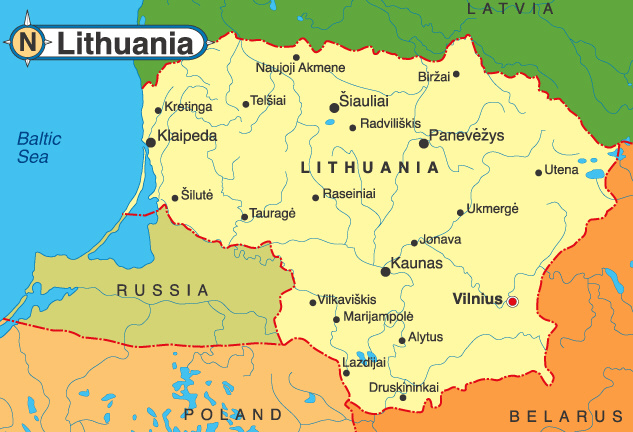 Lithuania is feeling the chill as the old cold war between Russia and the United States begins to freeze over again after 15 years of more or less amicable relation between the two former arch-enemies. This is according to the country’s president, President Dalia Grybauskaite, who, speaking after a meeting with U.S. Vice President Joseph Biden in Vilnius today, suggested that it is “too early to talk ” about economic sanctions that go beyond freezing assets of Russian citizens or refusing visas for international travel.

Lithuania feels the chill more than other European nations because, together with Latvia and Estonia, it is one of three European nations that are heavily dependent on Russia for energy supplies. A former Soviet satellite state, Lithuania was the first Soviet Republic to break free successfully from the USSR in 1990.

Sandwiched between Latvia, the former Soviet Republic of Belarus, Poland, and small sliver of Russia, Ms. Grybauskaite’s country is in a precarious position with respect to any kind of armed resistance against a potential Russian incursion. The Russian enclave of Kaliningrad Oblast is Russian territory, sandwiched between Poland and Lithuania.  It is the only year-round port open to the Russian Navy, which bases its Baltic Ocean fleet at Baltiisk because Russia’s St. Petersburg ports are ice-locked for five months out of the year.

With a strong military presence in Kaliningrad (formerly known as the East Prussian district of Konigsberg), Lithuania is understandably nervous about a bellicose Russian Republic anxious to re-annex its former Soviet Republics, but President Grybauskaite is doubtful that economic sanctions will be any more effective than the weak-kneed sanctions so far announced by the United States.

She said Russians have a long history of enduring hardship and “can survive anything. This will unite them with Putin and against the West. Do we want this?”

As the president of a former Soviet state that has spent 20-plus years of independence forging ties with the West, Ms. Grybauskaite has firsthand knowledge of how economic sanctions can play out.” I know how Russians think and believe me they don’t care about economic sanctions,” she said in her press conference.” This will work against us and not achieve anything.”

Ms. Grybauskaite fears that broad-based sanctions affecting the average Russian citizen will have the opposite effect on Putin, who can then go before the Russian people claiming innocence, and blaming the effects of the sanctions on the West. “We do not know what we will be next, but the (Crimea) precedent is bad.”

The Russian Federation is driving home the message of Lithuania’s vulnerability with a series of military exercises that have demonstrated a build-up of tactical weapons in the enclave that are not related to Russian naval forces, sending a clear message that Russia wants Lithuania to maintain a low profile about Crimea.

There are very few punitive economic sanctions available to NATO allies and their cohorts, but none of them will force Putin to pull back from his annexation of Crimea, and the one word answer for why they will no work is “energy.” The Russian Federation is a net fuel exporter and Russian fuel, both oil and gas, has the distinct advantage of not having to be shipped over water to get to the energy markets for which they are intended.

The Russian Federation exports $160 billion in oil and gas stocks to the rest of Europe each year. Some of those oil and as feedstocks actually make their way to the United States, even though the U.S. is now a net energy exporter, one of the innumerable ironies surrounding global energy policies.

The other sanctions that have been proposed against the Russian Federation will prove ineffective. Sanctions against specific named individuals will not shake Russian Federation President Vladimir Putin’s resolve. Freezing American accounts belonging to Russian oligarchs will not affect their lifestyles because, as oligarchs, they have resources all over the world…but the dumping the $300 billion in U.S. dollars the Russians hold would trash the weak economic recovery in the U.S.

The most important economic sanctions available to the U.S., or any other country attempting to impose its will on another country, are prohibitive tariffs on another country’s exports, or an outright ban on the importation of that country’s goods. The Russian Federation’s principle export is energy, but Russia is a technology and arms exporter as well as an energy exporter. No one who needs either of those export commodities is likely to abide by a non-binding trade embargo.

The U.S. has already dipped into its strategic reserves to drive crude oil prices down after they spiked up as concerns spread about a potential Russian incursion into Ukraine after the annexation of Crimea. The move was seen in Russia as “shot across the bows” of the Russian oil industry demonstrating that the U.S. has the ability to replace Russian oil exports if it needs to do so.

The winter is almost over, but Lithuania is feeling the chill from a renewed cold war and, like Latvia and Estonia, will face a very cold winter next year if Soviet fuel supplies are cut off. That would force the U.S. to help cover the Baltic states’ fuel requirements from U.S. strategic reserves. That, in turn, could trigger Russian reprisals, including dumping U.S. currency on the international financial exchanges. Most of the saber rattling on either side is designed for domestic consumption. Neither side in this conflict will do more than talk, and while the talk goes on, Crimea slides closer and closer to an irrevocable union with the former Soviet Union.