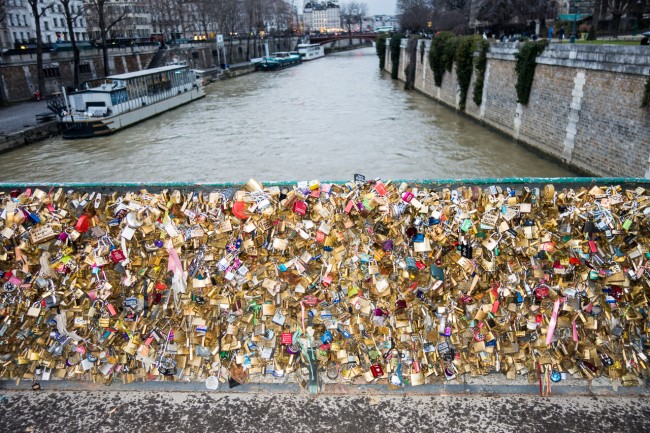 In a most unromantic move two American women living in the French capital of Paris have lambasted the tourist driven obsession of attaching love locks to the Ponts Des Arts Bridge. The female duo, Lisa Anselmo and Lisa Taylor Duff, have launched a campaign to rid the bridges of Paris of these love tokens as they believe the padlocks pose an environmental hazard to the city.Anselmo and Taylor Duff, both American expats, have now launched a campaign with the slogan “No More Love Locks: Free Your Love. Save Our Bridges”, which hails the practice as a serious hazard to the bridges of Paris and their corresponding rivers.

The practice of love locking involves attaching a padlock, often with the lovers initials or an intimate message inscription, to a bridge in a well-known city and throwing the key into the river below, purportedly as a symbol of ever-lasting affection which cannot be “unlocked”. It started in 2008 and has become increasingly popular over the years and as a result the number of padlocks, particularly hanging from the Ponts Des Arts Bridge, is higher than ever before. The sheer weight of the locks puts pressure on the structural integrity of the bridge and can damage the wire meshes of the railing segments. As well, the high volume of metal keys landing in the river and rusting has raised concerns about the possibility of water pollution.

Paris is not the only city which plays host to such romantic tourist whims with travelers all over continental Europe in major cities from Rome, Milan to Prague and Berlin, engaging in the love lock habit of showcasing their relationships. Equally, the two women are not the only people to protest against the practice as in some cities the locks are periodically removed with bolt cutters or pliers. According to some reports authorities in Prague cut off 30 pounds of metal lock from the famous Charles Bridge, every fortnight. Similarly in Rome there were complaints that the love lock trend was a form of vandalism and so many padlocks were removed from the Ponte Milvio Bridge as well. Although the women are currently campaigning for action to be taken concerning the Ponts Des Arts Bridge in Paris, there had previously been discussion by the Parisian government over the problem and ideas about potentially moving the love locks elsewhere.

There has been little action taken on the issue though, and so both Anselmo and Taylor Duff believe the best method to discourage the practice is to take the romantic notion which underpins the concept of love locks, out of the equation. Their campaign slogan rests on the premise that attaching a padlock which rusts and erodes itself, and the environment around it, is a poor symbol of love. They state that the practice has gotten completely out of hand and creates a huge cost to the taxpayer and have actually ruined both the bridges and romantic views which they offer to tourists. Thus, they argue, love locks are actually making the places where they are left less romantic and spoiling the destinations for future visitors. They also believe that the love locking trend is little more than romanticized vandalism and should be treated as such and so are now lobbying the French government to impose an all out ban on the love locks.

Despite these practical obstacles many visitors and travelers maintain that they like the tradition and feel it is a nice symbol of love, particularly given the romantic nature of many of the locations. Thus while the two American expats may have hailed the end of love locks, they seem no more likely to disappear any time soon than the Paris bridge itself, hazard or not.