Michelle Obama Talking Politics Unexpected in China and Got Downplayed 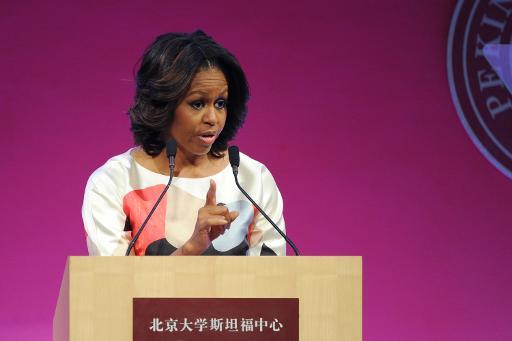 March 20 was the first day of Michelle Obama’s week-long visit in China, along with her daughters and her mother. The focus of this trip, officially, is on education and shared values between two cultures, not on politics. But Michelle Obama unexpectedly talked about politics topics such as speech freedom and universal rights in her speech in Peking University on March 22, and such content got downplayed in Chinese media.

The speech of Michelle Obama in Peking University was mostly on values of studying abroad and cultural exchanges. China is among the top five destination of Americans’ studying abroad and in U.S., there are more students from China than from any other foreign countries. She considered the studying abroad program not only provides education opportunities for students but also is an essential part in the China-U.S. diplomatic relation. She called for more exchange of students with different races, social and economic background, as the diversity is the core of U.S. culture and responsible for its strength and robustness.

Mrs. Obama said studying aboard is not just a way to spend one semester happily, instead, it is quickly becoming the key of success in the global economy. The grades in school are not enough anymore; the real experience of living abroad will bring understanding to the different language, culture and society. Such understanding will overcome various barriers to make coöperation possible. And coöperation between countries is the only solution for all the critical challenges in the world.

Then, Michelle Obama talked about unexpected political issues such as human rights and censorship, which were downplayed by Chinese media. She marveled at modern technologies giving ordinary citizens the opportunity to experience the world. The experience does not need to be getting on the plane to fly across oceans; instead, it can be just connecting to the internet, with any places and any people across the world in seconds. She said this is why the willingness and desire to connect is so important and she publishes traveling blog every day hoping to involve young Americans in this trip.

She said the free-flowing of information and ideas on the internet are of critical importance. This is the path to find truth, to know what is really happening in the community, the nation and the world. The free access to information is essential to question and debate all viewpoints and select the best ideas and values. She said countries are stronger and more prosperous when the voices and opinions of all citizens can be heard. The freedom of speech and worship, and having open access of information are all universal rights.

While western media widely reported the promotion of free speech in Michelle Obama’s speech in Peking University, this unexpected political content got downplayed in Chinese media. Majority of Chinese media only reported on education content of her speech, without any mentioning of speech freedom and universal rights. In fact, if “rights” is not explicitly added for searching, all search results shown up have nothing to do with it. Even when specifically searching for “freedom” and “rights”, at least half of links for Chinese content led to page loading error. The easy-to-find coverage of this speech from Peking University is a simplified version only with education content, while the whole translated speech requires some digging.

Michelle Obama Talking Politics Unexpected in China and Got Downplayed added by Tina Zhang on March 23, 2014
View all posts by Tina Zhang →