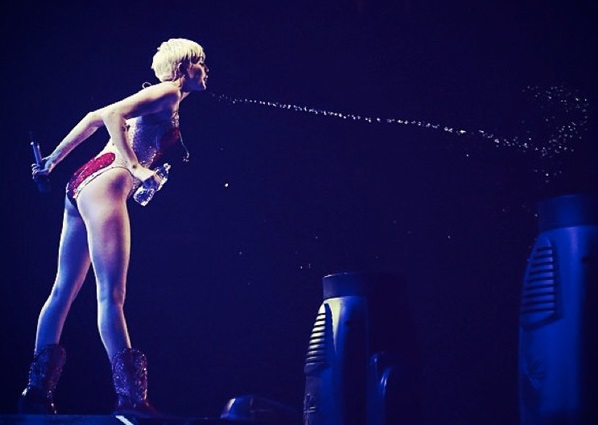 Pop diva Miley Cyrus has gone from twerking and tongue wagging to a whole new signature move, and this time, her new behavior gets her a little more up close and personal with concert fans as she spits water on the audience while she is performing. A face full of plain water is one thing, but a face full of water that has been swished around in someone’s mouth and then spit in someone else’s face is quite another.

Twenty-one-year-old Cyrus is known for her crazy antics and this is just another signature move on the star’s part. Her newest wild behavior started while performing on her Bangerz concert tour.  Last week, Cyrus gave concerts in Milwaukee and Tampa, and in the process, she gave her fans a face full of spit and water. Then on Tuesday when Cyrus performed in Atlanta, she did the same thing, so spitting on her concert fans definitely seems to be her new thing.

So how did her fans respond to being spit on? Sources say from the fans’ reactions, they absolutely loved it, went wild when the spit filled water hit them, and thought it was the greatest thing ever! Seriously, who loves getting spit on? While that type of thing is cool for some people, it is a big no no for others. And while everybody has the freedom to do what they want to do, what happened to thinking stuff like getting spit on is gross? But then, this is Miley Cyrus and her fans love her so it looks like they are game for anything she throws their way.

Some would even say that Miley Cyrus spitting on concert fans pales in comparison to many of the other antics she has pulled while on the Bangerz tour such as faking oral sex on a guy dressed up like Bill Clinton or the time she put one of her fan’s dirty thongs in her mouth and munched down on it.

And what about other times Cyrus has behaved in a wild and outlandish manner? Don’t forget the video from LOVE Magazine where she dons penis underwear, her appearance at the European Music Awards (EMAs) where she lit up what appeared to be a marijuana cigarette after accepting her award, or the video for her hit song, Wrecking Ball where she straddles a wrecking ball seemingly naked and seductively licks a sledge hammer.

But then all of those things were behaviors Cyrus chose to act out; however, spitting on people is something she is imposing on others. Has Miley Cyrus gone too far with her latest antic or she simply giving her fans a little “artistic expression?”

It is yet to be seen how other fans will react to her new spitting craze. Cyrus has additional gigs booked on her Bangerz tour in Montreal on Saturday before moving on to Toronto on Monday and then on to England next week. It will be interesting to see how fans along those three concert stops react to Miley Cyrus spitting in their faces.

One Response to "Miley Cyrus Spits on Concert Fans"