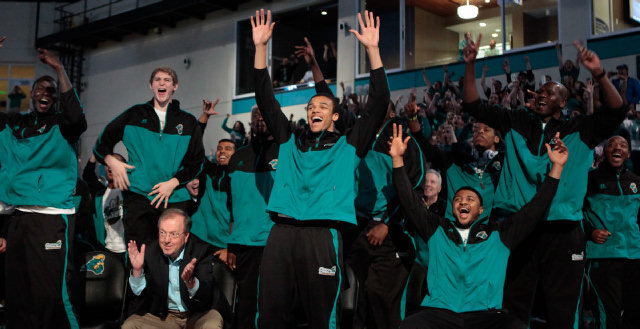 Coastal Carolina and Virginia are led into the NCAA Tournament by two excellent coaches in Cliff Ellis and Tony Bennett. Coaching will be important for these two teams who feature only three senior starters between them. The Chanticleers are facing a major talent gap, and while Raleigh may seem like it would be a great location for fans of a South Carolina school to invade it is actually about halfway between the two universities.

The two big men will be meeting each other down low quite a bit. The rebounding fights in this game are going to be tenacious, and these are the two best rebounders on their respective teams. Ndieguene has two inches and a few pounds on Mitchell, and a big key for the Chanticleers is having their big man dominate down low. Ndieguene only takes about four shots per game, and Mitchell is no scoring threat either, but offensive rebounding is one way Coastal Carolina may be able to put some points up against Virginia.

Virginia Notes: Coming off of their defeat of Duke in the ACC Championship, the Virginia Cavaliers are riding heavy momentum into the NCAA Tournament. Virginia has the No. 1 ranked defense in the entire nation, and should have no trouble stifling the offense of Coastal Carolina. On the flip side, their offense is not especially good nor efficient. Their leading scorer, Malcolm Brogden, only goes for 12.6 pints per game. Only two players score in double figures. The Cavaliers don’t even shoot well from the free throw line. Their success rides on being able to lock down the other team, which they have done that consistently. In 12 games this season the Cavaliers allowed less than 50 points.

Coastal Carolina Notes: Underdogs competing against favorites are what the NCAA Tournament is all about. The Chanticleers do not have near the positive point differential that their opponent has, but like Virginia have a very bankable skill in their rebounding. Part effort, part strategy, the Chanticleers give themselves a lot of extra opportunities to score. In a match-up with such a tough defense, Coastal Carolina gathering extra possessions for themselves is imperative. The Chanticleers keys to pulling an upset are pretty straight forward: extra possessions need to be turned into points, and turnovers have to be extremely limited. If they do that they have a shot to pull out the unexpected win.

Prediction: “Defense wins championships” is the drumbeat of every sport, and Virginia fits that motto. However, Coastal Carolina will come into the game with enough effort to pull off one of the biggest surprises in tournament history. Rebounding and coaching put them ahead of Virginia, who won’t be able to put together enough offense in spite of their stellar defense. Cliff Ellis has been around a very long time and has seen everything, and he has had five days to plan for Virginia. The Chanticleers overcome the talent gap to get past Virginia in the second round of the NCAA Tournament,  55-52.