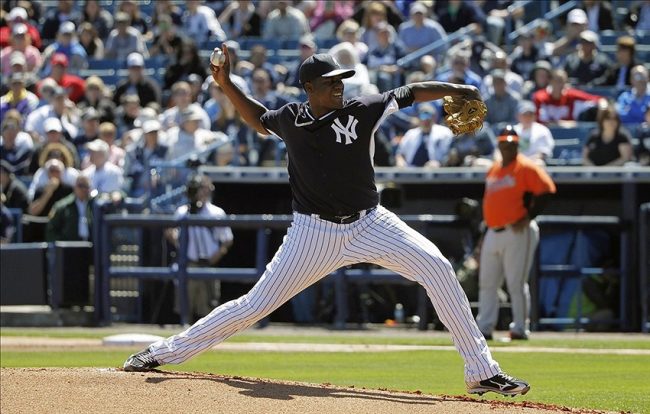 The Yankees will wind down the spring and prepare for the regular season this weekend with two more tune-up games against the Miami Marlins. Tuesday will bring opening day, on the road against the Houston Astros at Minute Maid Park. Spring Training offers players a chance to try new things, so results are not the most important facet. However, having a strong spring can be a boon to the confidence of both player and team, and for some people is the difference in making a major league roster. With that in mine, a look can be taken at who is hot and who is not coming out of Yankees Spring Training, from their expected regular contributors.

Going into the season hot:

Brett Gardner is doing just what Brett Gardner does. In 54 plate appearances he has reached base 22 times. Gardner will take up residence in left field, although he is probably their best outfield defender. He is also a perfect two of two stealing bases. On a team stacked with big names, including a future hall of famer on their bench in Ichiro Suzuki, Gardner is an underrated and valuable asset. The Yankees showed confidence in him by locking him up for four more years and $52 million after this season.

Michael Pineda was named by Joe Girardi as the Yankees fifth starter after a strong spring. Most important for Pineda has been the gradual return of his fastball, formerly brushing with 100 mph. Almost two years after his shoulder surgery, Pineda’s fastball is getting up to 95 mph. Most importantly is the consistent command Pineda has displayed this spring. In 15 innings of work, he has 16 strikeouts and only a single walk.

CC Sabathia is coming off his toughest season ever, posting career worst numbers in ERA, WHIP, and opponent OPS. But there is good news. He still pitched over 200 innings last year, showing his durability once again. Also, his weight is down, which can hopefully lead to more consistent, repeatable mechanics. Sabathia closed out the spring by shutting the Pittsburgh Pirates down for four innings, and has looked good thus far.

Going into the season cold:

Mark Teixeira is looking to redeem himself for a poor and injury riddled 2013 campaign. If he can get back to form in 2014 it would go a long way towards giving the Yankees a potent offense once again. So far, Teixeira has not been much of a threat at the plate. Infamous for his slow starts, one would hope he can pick it up sooner than later, because the Yankees infield is neither deep nor powerful at the moment.

Alfonso Soriano was an absolute revelation for the Yankees last season, at least for some time. In his first 20 games in pinstripes, Soriano demolished opponents pitchers to the tune of a 1.020 OPS. The rest of the way, he was back in line with what should be expected of a 37-year-old player dumped by the Cubs, hitting for a .756 OPS. When trying to project Soriano, who will DH in 2014, the entirety of his last five years is a much stronger sample than his first 20 games in the Bronx. He is a slightly above average hitter with good power and no on-base skills. So far in Spring Training he has shown neither.

Brian Roberts, like many current Yankees, is a once great player on the downside of his career. He has been ravaged by injuries, particularly miserable concussion problems. Since leading the league with 56 doubles as a second baseman in 2009, Roberts has not played more than 77 games in a season, nor has he performed. Acquiring him was not a bad move for the Yankees, but so far this spring he has done nothing to indicate he has returned to his former all-star form.