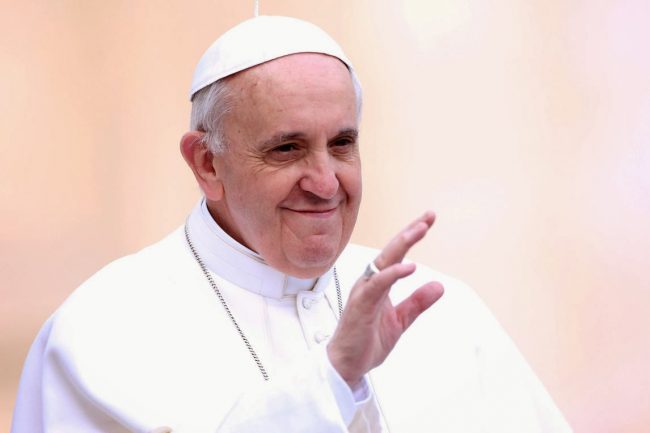 Pope Francis issued a stern condemnation of mafia mobsters on Friday during a prayer vigil at the church of San Gregorio VII in Rome for families of innocent people murdered by the mafia. This is the first time a pontiff has attended the ceremony, during which the names of 842 victims killed in Italy by the mafia since 1893 were read aloud. The pope warned mobsters to repent and change their ways or risk going to hell.

The pontiff addressed a crowd of nearly 1,000 attendees and after voicing his solidarity with the family members, Francis said he could not leave the service without speaking to those responsible–the ‘protagonists’ of mafia violence. “This life that you live will not give you joy or happiness,” Pope Francis warned. He went on to implore mafia members to examine their lives and change their ways or face eternal damnation in hell. Moreover,  Francis singled out three-year-old Domenico Petruzzelli, who was shot dead with his mother and her partner in a car near Taranto in southern Italy on Monday by mafia gunmen.“You have a father and a mother – think of them and convert.”

The ceremony at which Pope Francis issued his condemnation of mafia mobsters has been organized by the anti-mafia group Libera for the past 19 years. Father Don Ciotti, who is the head of the Libera organization, which combats organized crime and has organized the prayer vigil on an annual basis, called Francis’ presence a blessing and gift. Additionally, Ciotti stated that the pope’s presence was supporting “all of humanity which is fragile and injured, as well as drawing attention to the mafia, corruption, and the many forms of injustice.”

Pope Francis has spoken out frequently about the evils of corruption and wrote a short booklet on corruption and sin in 2005 when he was archbishop of Buenos Aires. Francis’ stern warning to mafiosi to convert recalled Pope John Paul II’s famous condemnation of the mafia in 1993. During a trip to Sicily, the Pope Emeritus condemned the mob’s “culture of death” and warned bosses that God’s judgment awaits them unless they converted. In response, the mafia bombed two churches in Rome a short while later.

Following his speech, Pope Francis outfitted himself in the ceremonial dress of a colleague and friend who was murdered by mafia members in Naples in 1994. Family members whom also spoke at the prayer vigil imploded the pontiff to see their pain and use his influence to help halt the violence that has claimed their family members and affected their lives.

Pope Francis’ condemnation of mafia mobsters and presence at the prayer vigil goes beyond the perpetrators themselves and was also intended as a message to the Church ranks, as well as organized crime. Some priests in southern Italy are still accused of turning a blind eye to the crimes of devout Roman Catholic mobsters, who contribute handsomely to Church coffers for the maintenance of churches and often place themselves at the head of religious parades in small towns. Father Ciotti stated that the Roman Catholic Church has not always given attention to the victims of the mafia and the presence of organized crime. However, many perceive the pontiff’s presence at the ceremony and stern warning as an extraordinary message to his priests in the south of Italy in encouraging them to choose a courageous path of opposition to the mafia.