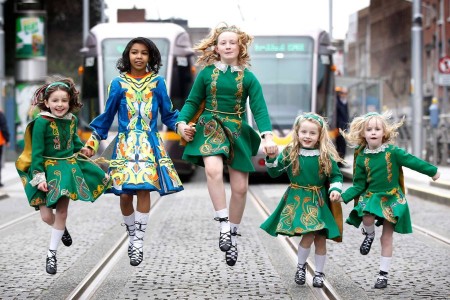 St Patricks Day is a Monday full of malarkey, which may distract us from our economic woes if just for a day. The National Retail Federation (NRF) is predicting that many will come out of their extended winter doldrums and spend money on costumes, food and entertainment in search of a way to shake off the blues. Since “everyone is Irish on St Patricks Day,” more than the 34.7 million Irish Americans will be celebrating.

With Boston taking up the lead, as they did with the first St Patricks Day parade in 1737, people across the country will eat, drink and be merry. Beer will be served green, corned beef and cabbage will grace restaurant and bar tables and there will be public festivals where amateur and professional jigs will be danced.

The NRF predicts spending for the holiday will be about $4.8 billion, the same as last year, which was just two percent more. That is about $36 per person. Youth between 18 and 24 years of age are expected to spend more. The donning of green colors will be done by 90 percent of those out and about at festivals and bars.

In Berlin, Germany, the St Patricks Day parade has grown from 150 people from the Irish community in 2011 to 5,000 Irish and German citizens in 2013. Now, the celebrations last a whole week, and comprise a festival of St. Paddy events.

St Patricks Day is a Monday full of malarkey. In Berlin, it is a week for celebrating the spring and a patron saint whose origins are not Irish, but British. He was brought as a slave to Ireland some time in the fifth century. St. Patrick escaped from slavery and later became a clergyman, becoming ordained as a bishop in the sixth century. He was revered as Ireland’s patron saint by the seventh century.

Dara O’Neill, an Irish pub owner, and Karol Keane, Fernanda Parente, Kiera Senst and Melanie Marten organize the festival, and are hoping to top last year’s attendance and contributors to the festivities. Although O’Neill has no sponsors for the festival, he makes sure that those who attend will not have to pay for attending the festivities. O’Neill says the reason the St Patricks Day festival is doing so well is because of the support of Berliners.

O’Neill also says the Irish population in Berlin are thankful for the events. Last year, he says met a 76-year-old woman from County Cavan: “She came up to me with tears in her eyes, asking if I was the organizer of the event. She gave me a big hug and said it was the best St Patricks Day she ever had in her life.”

Those who celebrate in the United States, whether of Irish extraction, enjoy the day with food and drink. In New Jersey, the media published a listing of events and food that will be served come Monday. The fare will include corned beef and cabbage, Irish soda bread, fish and chips and even Guinness porter cake, which contains dried fruit with an orange glaze.

St Patricks Day, while a Monday full of malarkey, has millions of revelers who will join to celebrate Ireland’s patron saint. Green beer will be served.