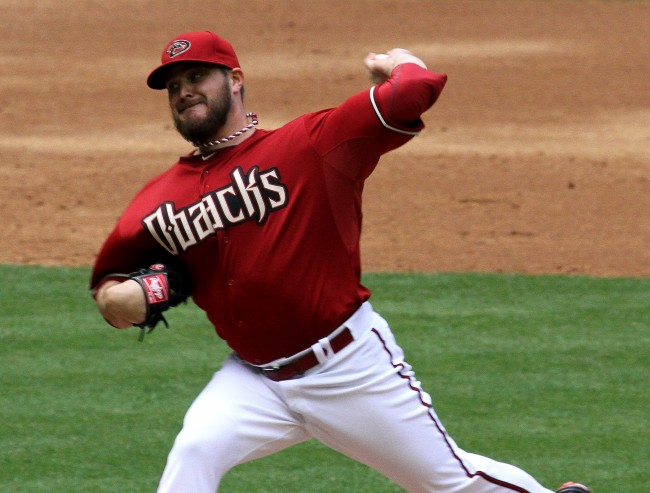 With the 2014 season underway, the Arizona Diamondbacks have a lot of unanswered questions to go with a team lacking an identity. Along with a lack of identity, the future of the team in regards to the manager and GM positions seems to be unanswered as well. The D-Backs informed the public roughly two months ago that they had agreed to extension terms with both GM Kevin Towers and Manager Kirk Gibson past the 2014 season, but they refused to give out contract length details citing that putting a manager and GM in a position to “win or else” would be detrimental to the team’s performance. However, anyone knows that given the past history of the D-Backs- being one of only two teams in the past five years to have double firings of GM and head coach-  no matter how long the extension was for, given the offseason moves this December, the chips are most definitely on the table.

With the injuries to Patrick Corbin and David Hernandez, Towers and Gibson have decided to go with ‘big bats’ over defense. Yet, that still leaves the Arizona Diamondbacks with an identity that is in a state of flux. Are the Diamondbacks going to be a team that belts in a ton of runs in order to make up for a lackluster pitching staff? Will the pitching staff finally hit on all cylinders and make the moves Kevin Towers made over the past two years pay off? Will “timely” hitting finally be an issue addressed due to the off-season moves this December that sent four of the D-Backs top five prospects away? The Arizona Diamondbacks appear to be a team that has made moves all in the hopes of possibly getting one thing right, but where does that leave them is still open for speculation.

The Arizona Diamondbacks, like a lot of teams in the NL-West this season, have a ton of potential but nothing to quite show for it as of yet. The pitching staff will have big question marks and even bigger shoes to fill in the losses of Corbin and Hernandez, but off-season pickups like Bronson Arroyo along with Addison Reed could fill these shoes nicely. Bronson Arroyo at age 37 is definitely not going to fill Patrick Corbin’s shoe’s, however, if the team can get the kind of production they had hoped for out of Trevor Cahill and Brandon McCarthy when they traded Jarrod Parker and Ryan Cook (for Cahill) and signed McCarthy for a ludicrous amount, the team has enough solid pitching to win games. Again, the potential is there, but how that translates into wins is another issue. If the team can pair that pitching with timely hitting and aggressive play calls by Kirk Gibson, the team will have an opportunity to finally get over the .500 hump.

Aggressive play calling and timely hits will also be a huge factor for the D-Backs success this year given the lack of its success the past two seasons.  The Arizona Diamondbacks led the league in the category of Grounded into Double Plays per Game last season and were second-to-last in Attempted Steals per Game. To go with those stats, the D-Backs were 20th in the MLB in Runners Left in Scoring Position and second-to-last in the NL in sacrifice hits. More aggressive play calling from the skipper to match the persona of playing “Gibby-ball” can pay huge dividends for a team that has clearly succeeded off of momentum and success. The pickup of Mark Trumbo especially may be one of the biggest determining factors of this team’s success. Trumbo adds a big bat to the lineup behind the likes of Goldschmidt and before Montero, therefore he will be able to see more pitches and ease some pressure off of Montero to succeed on a nightly basis. If the Diamondbacks can take advantage of “timely” hitting, with the help of some aggressive play calling, they could be a big force to be reckoned with at the plate… a team attribute that cannot be overlooked with the injuries to the pitching staff thus far.

After two consecutive .500 seasons, the Diamondbacks have retooled and retried the way they feel the team should go i. The Arizona Diamondbacks, understandably so, have to address injuries and retool accordingly, but what makes a team so effective and great year-in and year-out is having a vision of the future and going after it and the Diamondbacks appear to be on the defensive end of things every season. Sending four of their top five prospects will have to pay off for Towers and “Gibby”, otherwise, there will be a ton of questions needed to be answered as to why the organization decided to deplete the best of their farm system in the hopes of one big bat and a bullpen pitcher. This season will have a lot of questions needed to be answered along with a response to the question of “potential”, but if the moves by Towers and coaching by “Gibby” pay off, fans could be looking at a very special team.