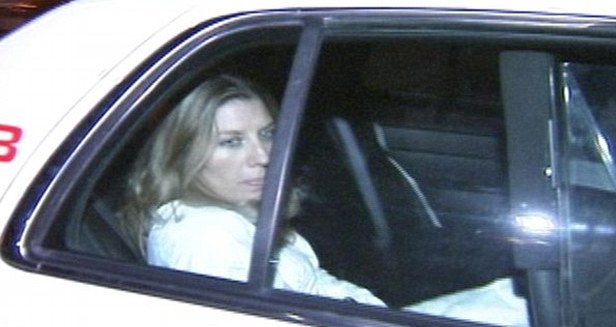 A New Brighton, Pa Bide shot her niece outside a bar with her husband’s gun. Reports state that the shooting transpired over a silly argument. She is currently being detained without bond in the county jail, awaiting her preliminary hearing May 2, 2014.

According to recent details that have been released Christian George-Harvan shot, Katelyn Francis in the Jimmy K’s bar parking lot at 10pm. Reports have documented that this shooting occurred, because they could not decide who would be the designated driver. The wedding took place earlier, and some of the attendees including the bride and her groom were looking forward to celebrating.

Onlookers recounted that something seemed a bit off with them, but they ignored it. James Botinovich told CBS Pittsburg, “Everybody in the bar noticed that there was something going on with the people, but nobody knew exactly what was happening.” The next thing they heard was a gunshot.

The authorities investigating this case reported what supposedly happened there were just three people involved. There was the bride, her husband and Francis her niece. For one reason or another, there was a heated argument over who would be the designated driver. Whomever was driving would have to remain sober the entire evening while chauffeuring the others home. The idea of not being allowed to participate in the evening activities must have caused the bride to become infuriated. Reports indicate that in the heat of the argument George-Harvan reached in her husband’s truck and grabbed the gun to shoot Francis. However, the bride’s attorney J Lauson Cashdollar disagrees with the idea that it was intentional.

George-Harvan told her lawyer that she did not intentionally shoot Francis. In fact, it was stated that she was only trying to move the gun when it discharger. That sounds like more than touching it, which is all George-Harvan originally admitted to doing. At this time, there are no concrete answers as to what actually took place outside this Pennsylvania Bar. The story is still developing as details are made available. The only thing that is clear is Katelyn Francis was shot.

21-year-old Katelyn “Katee” Francis succumbed to her injuries and died on the way to the hospital. The 30-year-old bride Christina George-Harvan is currently being detained in county jail on multiple charges. George-Harvan is currently being charged with one count of homicide, one count of reckless endangerment, and two counts aggravated assault. As aforementioned, she is being held in jail without bail until May 2, 2014. She currently maintains her innocence by insisting it was just an accident.

There is not any word yet from Mr. George-Harvan, the husband of the shooter. He would appear to be the only one who could provide some clarity on this situation. However, there is the possibility the he could be exercising his marital privileges moving forward. Marital privileges are recognised by the Supreme Court as the right to not disclose incriminating information against ones spouse. There are two types of marital privileges testimonial privilege and communications privilege. If enacted by Mr. George-Harvan that will protect him from testifying, and or communicating any incriminating information to the authorities.

Outside of the legal aspect of this developing case, CBS took a look into how this impacted friends and family. Annette Costanza, a friend of the victim had these words to share with the public. “It was insane. It is unbelievable, a tragedy. The victim was like my child because she was my best friends child.”