Clemson Football Program Accused of Being Too Religious 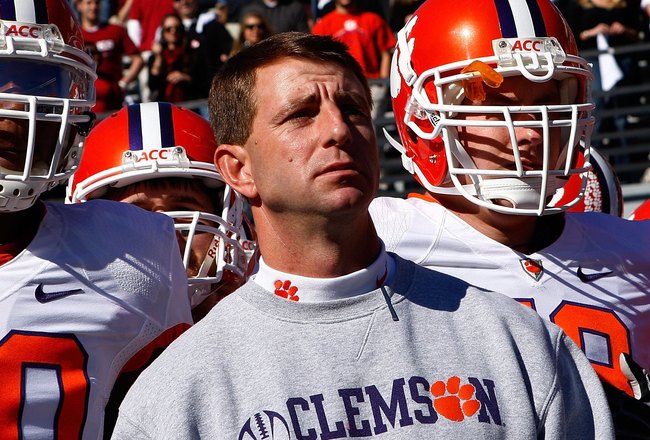 An organization that advocates for the separation of church and state is accusing the Clemson University football program of being too religious. The non-profit Freedom From Religion Foundation sent a formal letter of complaint to university officials, saying that head coach Dabo Swinney fosters a culture within the South Carolina school’s football team that promotes Christianity to an alarming degree.

In the letter, the Wisconsin-based atheist foundation pointed to several actions on the part of the coaching staff that it sees as endorsing religion over non-religion. Swinney’s decision in 2011 to hire a team chaplain that conducts bible study for coaches twice a week and devotionals three times a week, they said, and also conducts bible study for players between drills during practice is unconstitutional. The chaplain, James Trapp, has also led sessions on being baptized in his office in the athletic center, the letter contended.

School officials denied that the football program forces religion on any individual. In an interview with the Greenville News, Clemson public affairs officer Cathy Sams said that, despite coach Swinney’s strong faith, taking part in anything religious in nature is completely voluntary and nobody is forced into anything religious involving the football team. Sams stressed that although religion is a big part of coach Swinney’s personal life, he does not force his beliefs on anyone.

There have been no complaints, Sams said, from current or former students regarding being pushed to take part in any religious practices or activities. However, the Freedom From Religion Foundation is adamant that the intermingling of religion and football at the school cease to exist and that Trapp’s position as Chaplain be terminated. Patrick Elliot, an attorney for the foundation, said that, along with the end of the chaplaincy position, his organization would also like to see the distribution of Bibles by coaches and devotionals put on by coaches and staff come to an end.

“The coaches need to step back and just coach football and not coach in religious matters,” Elliot said.

Swinney has always been outspoken about the importance of religion in his life. In 2012, wide receiver DeAndre Hopkins was baptized on the field in the middle of practice. Last year, in an interview with the Chronicle of Higher Education, Swinney admitted to telling recruits, “I’m a Christian and if you have a problem with that, you don’t have to be here.” He credits his faith with everything from landing him the head job at Clemson to guiding the Tigers to three 10-win seasons. But at the same time, he has always maintained his openness to those of all faiths. Swinney said he has had Muslims, Catholics, and Mormons, but out on the football field, it is not about being Christian, it is about being the best football player.

Clemson officials said they are reviewing the complaint and plan to take it up with the Freedom From Religion Foundation, but believe the foundation has inaccurately characterized the university and its football program. Moreover, they said, Swinney’s use of religion does not violate any of the institution’s principles.