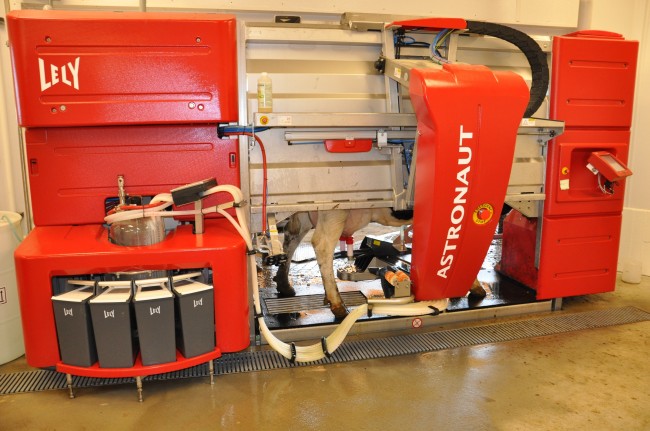 Times are changing and thanks to advancements in technology, dairy-farming just got easier. No longer do dairy farms have to depend on farm hands to wash cow udders, hook milking machines up to each cow, wait for the cow to be milked, and then unhook the milking machine because now, cow-milking robots have taken over and do the job automatically when cows are ready to be milked.

Cow-milking robots have been used in Europe for quite some time but they are just now catching on in the United States. This is how they work – when a cow is ready to be milked, she will walk into a metal stall, which triggers the robot to take over. First, a laser scans a bar code on the cow’s transponder located on a collar around her neck. This helps the robot identify which cow it is preparing to milk. Then a specially flavored grain drops into a feeding trough in front of the cow so she can eat while she is being milked.

Next, an arm with rotating brushes swings under the cow and cleans each teat and the bottom of the udders. Then three different levels of lasers take over. The lasers scan and attach a milking nozzle to each teat and begin the milking process. The robot keeps track of information pertaining to each cow, such as their milk production, milking patterns, and teat location. If there is ever a problem with one of the cows, the robot will call the farmer. When the cow has been milked, the robot releases the nozzles and re-sanitizes the teats and udders. Then the feeding trough opens up and the cow is free to walk out of the stall so the process can start all over again with the next cow in line.

The Borden family in New York invested approximately $1.2 million on the cow-milking robots and the milking facility, and while that is a huge investment, the farmers say it has been well worth it and they are loving the new system. Farmers say while investing in the new milking system has been a leap of faith, they are hopeful they will be able to recoup their investment quickly thanks to rising dairy prices, which have been driven by demand for Greek yogurt and cheese exports to China.

Initially, the farmers worried that milk productivity would fall because the cows would be reluctant and skittish about the cow-milking robots. However, they were pleasantly surprised when the cows not only accepted the robots but caught on and were milking themselves in no time.

Having the cow-milking robots are not only a help to the farmers, but because they have taken over and can work around the clock, the dairy farm’s efficiency has greatly improved. In fact, farmers say using the robots enable them to accomplish more than three milkings per day using the same amount of labor it used to take to achieve only two milkings per day. In addition, the robots enable farmers to handle the dozens of other tasks that must be attended to on the farm while not having to worry about the cows getting milked.

However, the cow-milking robots are not the only new addition to take over dairy farms; another robot that resembles a gigantic Roomba slowly moves around the barn cleaning, and some farmers have robots out in the field that round-up the cows and herd them to the barn.