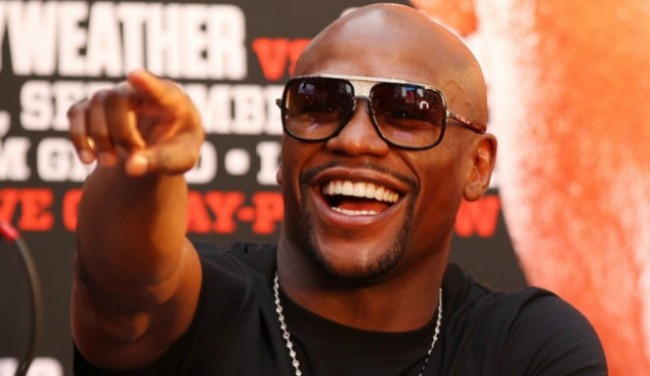 Floyd “Money” Mayweather has stepped up to the plate and expressed his interest in buying the Los Angeles Clippers. In the wake of everything that has transpired over the past four days it should be given serious consideration. The NBA has come to a decision to Bann Donald Sterling for life. Adam Silver would like to follow up the act of banning Sterling by forcing him to relinquish ownership. If he can get the one-third vote of The Board of Governors the Clippers are on the market.

USA Today got the official statement yesterday from the welterweight champ. He emphasises that he is seriously interested, and would like a solid percentage. Mayweather was quoted as saying; “I can’t come in here talking about Mayweather only going to get 3% or 4%.” He continued by reiterating that he is willing and ready to buy the franchise if possible. Money Mayweather also saw fit to remind people he is not just blowing smoke. “Me and my team want to buy the Clippers. And we can afford the Clippers.” Some may wonder why Mayweather is so intent in acquiring the LA team. The answer is simple he is a big Los Angeles Clipper and Lakers fan.

Money Mayweather could bring a lot to this franchise if he is given the opportunity to buy. He already has close relationships with many of the NBA’s elite, and he has close connections with many different companies. Those attributes can come as an asset, because having a long-standing relationship with players and companies simplifies the act of acquiring them. The Clippers have already lost some sponsors they are trying to acquire more.

One common issue that comes with a team under new ownership is the possible changes that could occur. Some owners buy the team and change various aspects of the franchise. For example, when the New Jersey Nets came under new ownership their name, logo, and location changed. The New Jersey Nets became The Brooklyn Nets. The Clippers are a LA team would lose a lot of their teams’ identity if it were changed. USA Today felt the need to ask Mayweather the crucial question, would he re-locate the team? His answer was “no” he would like for the franchise to stay right where it is.

Although, he often trains in Las Vegas for upcoming fights he has a house in Los Angeles. His house is conveniently located within walking distance of the Staples Arena. He shared that he actually walks to those Clippers games that he frequents so often. However, there is one downside to Mayweather buying the Clippers, and that is he will have to stop betting.

At this time Donald Sterling is fixed on not selling, but when he is Mayweather will be waiting to purchase the Clippers.

One Response to "Floyd Mayweather Jr. Interested in Buying the Clippers"