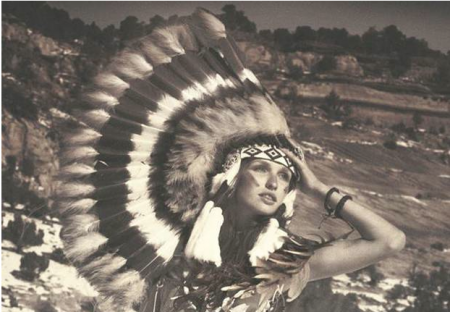 Heidi Klum has been slammed for using a Native American themed photographic shoot and she may have to bury her art at Wounded Knee, or in Utah, which is where the shoot took place. The 40 year-old fashion icon and host of Project Runway is being called racist and accused participating in “cultural appropriation.” For those who have no idea what that means, a definition may be in order.

Cultural appropriation is the act of taking a part of one culture’s elements, by another culture for aesthetic or artistic license. The term does not necessarily have a negative connotation, although in the case of a “superior” or dominating culture borrowing from an “inferior” or subdued culture it can be seen as a bad thing.

Apparently Native American’s are upset by Klum’s use of headdresses, and other things such as “war paint” and what appear to be lances, moccasins and “teepees” as well as other “Native American” motifs. While it is, as one Native American put it, insulting for women to be wearing headdresses that should only be worn by men, which could be seen as being sexist, is Heidi being deliberately racist in her, or whoever thought it up, choice for the photoshoot. Probably not.

Certainly Heidi Klum cannot be held completely responsible for the fashion debacle which could be labelled, “Bury my art at Wounded Knee.” Heidi is an American citizen who did not grow up in her adoptive country, and really how many of the younger generation are aware of what horrible things were done in the name of Manifest Destiny, so she can be excused for “her” mistake.

It seems that Ms Klum is not the only fashion “icon” to indulge in a little cultural appropriation. In 2012, Victoria’s Secret trod on some Native American toes when they used a headdress as part of a semi-naked Karlie Kloss’s small runway outfit. While it may seem a bit of a knee-jerk reaction to some folks to certain factions not taking seriously the culture of Americans who were almost wiped off the face of the earth by U.S. forefathers, it is not.

As was pointed out very clearly by Native Appropriations, “playing Indian is still relegating Native people to stereotypical roles, or tropes. The country itself has recognised that “blackface” is racist, but, “redface,” apparently, is not. Ask any person of Native American heritage, who know enough about their family background to have relatives who died in the Trail of Tears or in any of the atrocities committed by the “superior” forces of troops against women and children and they will most likely relate that it is not clever or fashionable.

Of course all blame cannot be put on one doorstep. In the settling of America there was a clash of several different cultures, those who brought differences with them to their adopted country and that of the various Native American’s who lived here already. The biggest problem was the new “white” settlers failing to understand that the Natives did not do things the way they did. It appears that this same lack of understanding has caused a uproar because of a fashion faux pas.

Whomever the person was who dreamt up this little display of cultural indifference most certainly did not intend to upset Native American’s who may find it hard to have a sense of humor about this photoshoot. Obviously, neither Heidi Klum, or whoever thought this up, remembered the backlash that the ladies lingerie giant that is Victoria’s Secret got when they used a Native American motif in their 2012 runway show. Heidi may not have to bury her art at Wounded Knee just yet. Neither Ms Klum, nor her rep, have released statements about the furor raised by the war-bonnet wearing models, but when one is forthcoming, it will most likely be an embarrassed apology.

One Response to "Heidi Klum: Bury My Art at Wounded Knee?"