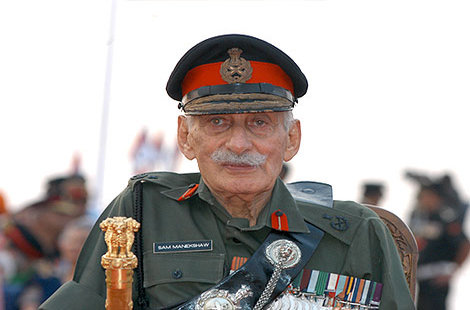 Every time one steps onto the field, a century is in the mind. Sam Bahadur Manekshaw the first ever Indian Field Marshal, a man with an imposing figure, a noticeable nose, a monstrous mustache and a lion heart did it better than any other bravado. Sam Bahadur as he was fondly called by his Gurkha companions started his stellar seven decade Military career with the British Indian Army during the World War II and marshaled through three wars with Pakistan and one against China till his death in 2008. But, his greatest moments came during the 1971 Victory against Pakistan that helped create Bangladesh from East Pakistan.

Sam Bahadur was born into a Parsi family in Amritsar, British India on April 4, 1914. His father was a doctor and he too desired to go to Cambridge and become a doctor, a Gynecologist at that. But, his extraordinary intelligence meant he would complete his matriculation much earlier and so had to wait eighteen long months before going to England. During that long break, Sam Bahadur decided to sit for the British Indian Army test and came out with flying colors. From that moment the man never looked back, climbing steadily to the highest peak.

Sam Bahadur swiftly built a reputation among his military contemporaries as a brilliant man of action. He displayed military genius and exceptional bravery during the WWII Japanese encounter in Pagoda Hill, Burma in the process taking seven machine gun bullets in his lungs, stomach and kidneys. The doctors almost gave up on him, but the Bahadur fought back to good health. Later he fondly recalled his father’s warning letter that said, if he drank the odd gin or smoked again he would be done for the good. He later asserted that continuing his Bohemian lifestyle and not following the advice of his doctor dad was the right choice. Just before the Indian independence, Sam Bahadur was promoted as the Lieutenant General.

Following the partition of India, his regiment went to Pakistan and its founder Mohammed Ali Jinnah persuaded Sam Bahadur to rejoin his old force. Like any sensible head, partition  and a religious one at that was imbecilic to him. Promoted Sam Bahadur stayed on as an Indian and the 1948 Pakistan War brought out the man of ideas. Under his command, his men rammed through the enemy lines in Kashmir and soon he again rose rank. But Sam’s Army days were all not rosy, in the late fifties the feud loving India defense minister Krishna Menon summoned a code of inquiry against Sam Bahadur for anti national activity. The 1962 Sino-Indian War came to his rescue as Sam Bahadur went off to the Himalayas and ended up fighting gallantly against the Chinese.

Steadily by 1969, he became the Indian Army Chief General and then came his defining moment. The 1971 war against Pakistan had Sam Bahadur’s footprints all over it. First, he refused to rush the war that Prime Minster. Indira Gandhi ordered. He had a perfect knowledge of Indian geography and weather patterns and so he decided to wait out the monsoon in East Pakistan before giving the green light. He brilliantly drew the plan of action and masterfully commanded his troops, crushing the enemy in days and in the process creating Bangladesh. His men claim that if the government didn’t command a back off after the victory, Indian Army led by Sam Bahadur would have marched into Islamabad just like the allied forces did in Berlin during WWII. If Sam Bahadur desired, in 1970 Indian would have had its first military head and even the prime minister Mrs. Gandhi feared it.

Sam Bahadur once recalled the encounter with Mrs. Gandhi in an interview. The prime minister was going through one of her many bad phases in 1970 and the rumor was out that Sam Bahadur will soon run down the government to become a military leader. Sam apparently went to the prime minister’s residence and Mrs. Gandhi looked straight in his eyes and asked if he is taking over the country. The witty Sam Manekshaw answered “Prime Minister, you kiss your own sweetheart and I’ll kiss mine!”

Immediately, Sam Bahadur was honored with the first ever Indian Field Marshal. The international press compared him to the great American Hero Field Marshal Montgomery. He was offered many a political position, but he refused and settled down in a quiet defense service base in South Indian called Wellington. Sam Bahadur not being honored with India’s highest civilian award the Bharath-Ratna, is one more proof that government awards are irrelevant just like the Nobel Prizes. Sadly, when Sam Bahadur died in 2008 the chinless Indian government ignored his funeral ceremony and so did the Indian Military chiefs. But, it is often said history never lies, history never dies. In Indian history there will only be one Sam Bahadur, Field Marshal Sam Bahadur Manekshaw: The Man of Ideas and Action! An amalgam that gave India an imperishable light.