Loch Ness Monster Shadowy Image or Something Else? [Video] 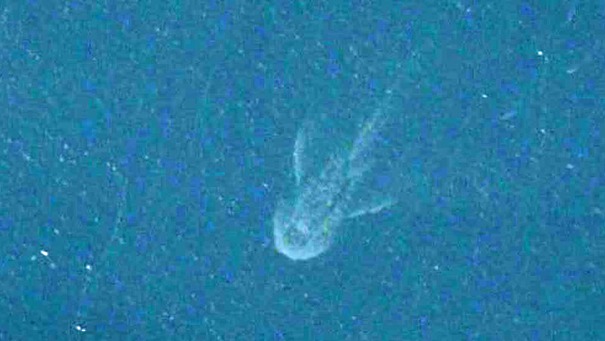 Loch Ness Monster fans and theorists were all aflutter this week when an image captured by Apple Maps was unleashed in the media as undeniably being nothing else other than the shadowy image of everyone’s favorite sea monster: Nessie. Disappointingly enough, Andrew David Thaler, a deep-sea biologist who writes for the website Southern Fried Science, has debunked any claims that the distilled image is in fact Nessie.

Sorry, kids. The image is a faint presence of a big, charming boat wake.

The image captured by an Apple satellite is roughly 20 meters in length and resembles the rough outline of something that looks like a flattened fish with a long tail, often the same description used to classify the illusive fish giant in Loch Ness. So-called Loch Ness Monster “experts” claim they held onto the photos for six months speaking with boat “experts” and finally can claim that the shadowy image from the satellite could not be identified as anything else other than Nessie. What compelled and mystified the “experts” researching the photo was that although the outline closely resembled a dissipating boat wake, there was no boat. This led to the immediate conclusion that it had to be Nessie. Well done, experts.

Thaler, albeit earnestly eager to dash hopes, has gone to the extended trouble on his website to detail exactly how the satellite images are not monsters. First, he compares the alleged Loch Ness Monster image with that of an actual boat taken from the same location and overlays the images. They are totally twins. 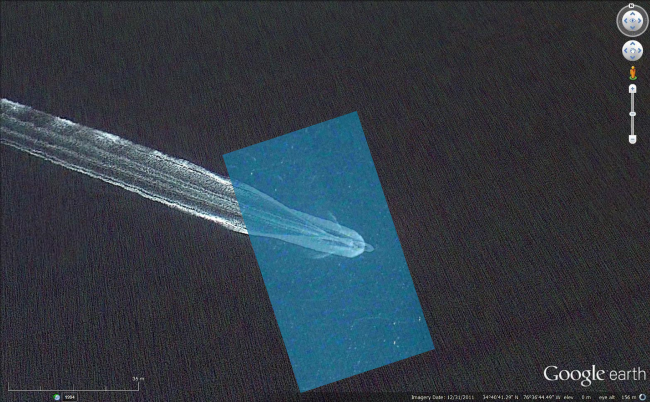 Oh, Nessie. Why do you toy with everyone so?

Thaler also continues to dismay legend theorists by pointing out how satellite imagery is actually generated. First, images from satellites are not taken in real time. The image seen in the Apple satellite photo is from 2005. Not that the date disproves a connection to Nessie, but it serves as an illustration of  how people may not know what they are talking about. Also, a series of photos are taken as the satellite traverses its orbital path, which are later stitched together. It is similar to taking a panoramic photo with a small lens. Such types of photos are bound to have inaccuracies and are not renowned for their precision.

The following also needs to be taken into consideration, and it might be something not many boat “experts” are aware of:  Boats cannot be seen from space. Bummer, huh? There’s usually just a “ghostly” outline of the vessel, which Thaler argues is completely discernible in the “Nessie” photo, especially if one has seen images of boats taken from satellites before.

Considering that Apple does not have their own satellite, borrowing its images from other sources, and the blurred form is only visible via Apple applications and not via Google, Thaler suggests that Apple may have used a separate set of images to purposefully stitch something up to look like Loch Ness and its monster.  Alternatively  Thaler concludes that perhaps Apple “has a less robust algorithm for dealing with artifacts.”

In conclusion, although the size of the image is not in debate, and the immensity of the image does coincide with tales of Nessie’s monstrosity, Thaler contests that there are no 20-meter long catfish, and due to the fresh waters of the landlocked loch, he questions how any sea creature relative to that size would survive in such an environment. According to Thaler, “If something looks exactly like a boat wake, in a place where there are plenty of boats, when a similar boat can actually be seen in the same region, it’s a boat.”

No Nessie. It is rumpled water.

For those who would like to cling to their hopes that the captured shadowy image is none other than the famed Loch Ness monster, there are plenty out there in the same boat that will believe nothing else. But, they are probably in a different boat than the one captured in the images below.

4 Responses to "Loch Ness Monster Shadowy Image or Something Else? [Video]"