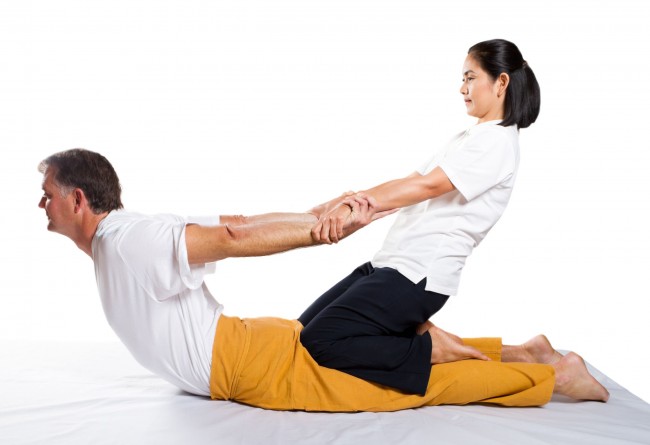 Swedish massages, or “classic massages” as they are called in Europe, are the most popular types of massages in the United States. This style of massage was first developed in 1812 at the University of Stockholm, and was based on knowledge learned from dissecting humans. It employs five major kinds of techniques: gliding “effleurage” movements, kneading “petrissage” movements, gentle drumming or pounding “tapotement” movements, vibration, and friction. In part because of its popularity, in the absence of further specifications the word “massage” will most likely refer to a Swedish massage.

By contrast, the history of Thai massage extends much farther back, with some estimating that it is at least a thousand years old. Since its founding, Thai massage traditions have been passed down via oral tradition by Buddhist monks and other healing practitioners. The principles of Thai massage are derived from beliefs about the body’s energy paths. Disease is believed to be caused by blocked energy pathways that are the result of a disassociation from God. While Thai massages include some of the same techniques as Swedish massage, they also can involve more rigorous stretches that may resemble yoga-like partner stretches. Compared to Swedish massage, the physiological impacts of Thai massages have been relatively unexplored.

To study the differences between Thai and Swedish massages, a team of researchers led by Dr. Virginia Cowen of Queensborough Community College recruited 53 participants to either receive a Swedish or Thai massage. They collected data immediately before and after the massage, and also 48 hours later to evaluate physiological responses such as heart rate, blood pressure, and range of motion. In addition they also evaluated the subject’s psychological responses with questionnaires designed to evaluate anxiety and mood.

The results of the study indicated that despite different techniques, people did not experience significantly different psychological or physiological responses to Thai and Swedish massages. Both types of massage lowered the resting heart rate, but had no effect on blood pressure. In addition both types of massage also increased the range of motion, with the recipients of the Thai massages showing slightly more improvement than those that had received the Swedish massage. These results confirm those from previous studies that found that Swedish and Thai massages were equally beneficial in relieving back pain associated with myofascial trigger points.

In addition, the assessment of the psychological benefits of both Swedish and Thai massage styles were shown to reduce anxiety and improve mood. Even more interestingly, these improvements were observed to persist for the two days following the massage.

An additional discovery from this study found that there was no difference between the reported vigor-activity or fatigue-inertia indexes used to evaluate a participant’s energy levels after a massage. This contradicts the common belief that Thai massage makes recipients feel more energized than those that receive a Swedish massage.

It is worth noting that this study only examined the health benefits of a single massage treatment, and that perhaps continued participation in different massage programs would reveal more dramatic differences between styles. However, as it stands, the data would indicate that Swedish and Thai massages do not significantly differ in their health/wellness benefits.

2 Responses to "Massage: Thai vs. Swedish"