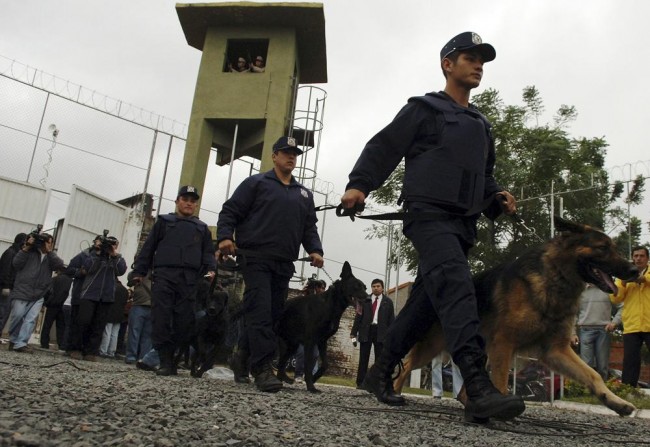 Paraguay is involved in controversy after two teens died when a riot broke out in a juvenile prison. The prison is located in Itaugua, which is 30 kilometers outside of the capital, Asuncion.  The country is landlocked and surrounded by Argentina, Brazil and Bolivia. One 17-year-old escaped during the riot and a 15-year-old and 17-year-old boy were killed.

The riot apparently started Monday night when prisoners set fire to their beds in a demand for more TV time. Two guards have been arrested for allegedly using excessive force during the riot by opening fire with live rounds. This is a violation of rules, because guards at this prison are only supposed to use rubber bullets on the juvenile inmates.

According to the forensics report, each teen had been riddled with nine bullets. The official report claimed that 40 juveniles surrounded the acting director of the prison, Julio Bogado. According to the account of the accused prison guards, Ignacio Franco and Juan Carlos Saucedo, one of the juveniles held a knife to his throat.

A video later released by ABC contradicts this, as it only shows one manager being attacked by one teen and he never goes for the throat. UNICEF (United Nations Children’s Fund) has also become involved and is calling for an investigation. This is not the first time Paraguay has been in hot water with UNICEF. Back in 2004, Paraguay was found guilty of human rights violations from 1996 to 2001.

As seen in the video, the guards were not surrounded by 40 prisoners, as the people of Paraguay were led to believe. Their side of the story at least in that part is false. If this is not fully investigated to the liking of UNICEF, they may be subjected to another court hearing like the one that occurred in 2004. Francisco Javier Rojas (15) and Néstor Rodríguez Duarte (17) have been identified as the two teens whose lives came to an abrupt end in the prison riot in Paraguay. Also, the teen who escaped has been identified as Manuel Elias BD (17).

After the shooting, officials had to evacuate the building due to the fire that was started by the juveniles. Many are calling for the death penalty of the guard who caused the deaths of the teens. There will be no death penalty for this crime, as Paraguay abolished the death penalty in 1992. UNICEF has warned that according to article 65 of the U.N. standards, carrying heavy weapons, in this case 12-gauge shotguns, are strictly prohibited in a juvenile facility. Most likely not only will the guards be heading to court, but also those involved in running the facility will be as well.

Some may argue that since each teen had nine bullets in them that the persons responsible should be put to death. All of one teen’s bullets were found in his head and neck. The other teen had bullets located in his chest and side. It is horrifying to imagine how much these children suffered needlessly. In the future, the prison surely will ban all bullets, except for rubber ones, because UNICEF is now involved, thanks in part to the video released. This prison riot ends on a bitter note with two families mourning the loss of their dead.