Racism or Not? Tale of Two Arizona Mothers [Video] 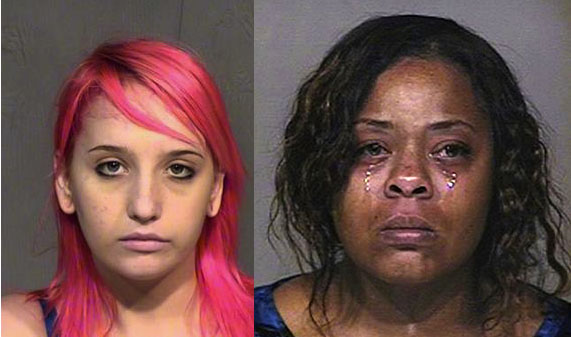 Hip-hop journalist and historian David “Davey D.” Cook posted on Facebook on April 16 two news stories of how two mothers, one white and one black, were treated after being arrested for child endangerment. By comparing both Arizona stories, this tale of two mothers could spark another debate on racism. But is there really racism as Cook claims or are the facts cherry-picked to fit into one’s beliefs based on incomplete evidence?

In the first story, 19-year-old Catalina Clouser from Phoenix, Arizona, was arrested in 2012 for leaving her 2-month-old child on top of her car while under the influence of marijuana. She drove for 12 miles with her baby on the roof of her car. By the time she realized what happened, the baby had already toppled off the car and was later found in his baby seat unharmed. According to Daily News, Clouser was sentenced to 16 months of probation and three months of deferred jail time.

In the second story, 35-year-old Shanesha Taylor from Scottsdale, Arizona, was arrested in March 2014 for leaving her 2-year-old and 6-month-old in her car for at least 45 minutes while going for a job interview. Taylor, who was homeless, could not find a babysitter and was charged on two accounts of child abuse after her arrest. According to Today, witnesses found the children in the Dodge Durango crying and sweating, and the car windows were opened just an inch with an interior car temperature of about 100 degrees. The children were taken by Child Protection Services (CPS) to a local hospital and were found unharmed. Taylor faces a maximum penalty of more than eight years in prison.

At first, comparing both cases may seem like Taylor had a harsher treatment and sentence than Clouser. However, comparing the tales of these two Arizona mothers may have very little or nothing to do with racism. First, Taylor is not really homeless. According to the Daily Mail, who interviewed her great-aunt, Henrietta Grant, Taylor lives with her father, Eddie Mullins, in a four-bedroom house. Police said that Taylor had “claimed she was homeless” and couldn’t find anyone to watch her kids. Grant said that she was “too proud to ask for help.” Because Taylor had served in the U.S. Air Force, according to Grant, it is quite possible that she felt “ashamed of how low she had fallen, living on food stamps.” Her pride made her refuse to ask for help.

Taylor’s bail was paid by a local church; however, if she is convicted, Taylor will face a minimum of two years of probation, according to AZ Central. Clouser will be spending three months in the can with 16 months of probation. Taylor’s children are currently with the CPS. Clouser may still be able to see her son while on probation, although this fact is not certain yet. In either scenario, no one really is better off than the other at this point.

So is comparing these two women an example of racism? Cook thinks so. Taylor’s arrest may have been unnecessary. “As far as leaving kids in the car, it’s still a discretionary call,” Cook wrote on Facebook. “There are parents all over who have done that and have not been arrested. Some do it as they run into store, house, some have forgotten. Arrests and extractions come if harm is done.” Cook also noted that Taylor’s prosecutor, Bill Montgomery, is known to “overcharge folks,” especially those of color.

Not everyone agrees and readily accepts the racism between the stories. One commentator, a black male, wrote,”This post is misleading. Both women had their kids taken away and both were charged with multiple felonies. The black mothers case is still not resolved though as its much more recent. So far though they’ve been treated exactly the same.”

Another commentator wrote that both women deserved the punishment regardless of what their reason for leaving their children in the car (or on the car). “The difference is the white woman pled guilty so she would get a lesser sentence where as the black woman wants her case to go to trial & because she refuses to plead guilty which in my opinion…stupid because I think it’s a no brainer. She deserves to be punished just like the white girl!”

Another wrote, “Although I have no doubt that racism does exist. It is a huge leap to assume racism and such a leap requires a lack of understanding of the judicial system.If you are offered a deal and you plead out you can get a lighter sentence. Also, if you plead out you have no jury to decide your fate, just the judge and DA. If you plead not guilty, you will likely contend with a jury. Even if the woman on the right had a judge trial instead of a jury trial, there is nothing here saying it was the same judge. Apples and oranges.”

Whether the comparison between these two mothers is an example of racism in Arizona is not conclusive as these tales do not have a definite or satisfying ending. Before jumping to conclusions and raising the “racism” flag, check multiple sources of the same story and understand the bigger picture. Perhaps there is more to the story than just what people claim. As these cases continue to unfold, time will tell whether there is really racism or not.

26 Responses to "Racism or Not? Tale of Two Arizona Mothers [Video]"