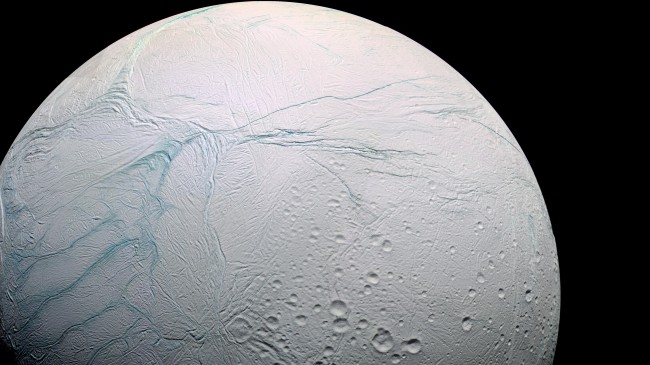 Hiding in the shadow of the great ringed gas giant of Saturn is a small unassuming moon by the name of Enceladus. But on this small planet, NASA  has said that they have found signs of a vast ocean hidden under a crust of ice. The icy water could signal that it may be possible for the moon to host alien life.

In 2005, Enceladus decided to put on a show. The small moon sent out a number of great plumes of mineral dense water into the surrounding atmosphere. These waves were forced out of “tiger stripe” cracks close to the southern pole. Scientists hypothesized that these plumes could be the result of a vast ocean hidden under the ice, but at the time, they could not be sure.

Now they have been able to use new data from NASA’s Cassini probe to analyze the possibility that there is an ocean on the moon. Cassini passed over the moon several times and scientists measured the gravity using the Doppler Method; which is said to be based on the wavering signal coming from the probe. Cassini was tracked via how much change there was in the signal, in response to the gravitational pull. If the signal fluctuated it would indicate that there is a denser area beneath the ice. As Cassini moved towards the south pole, the signal began to weaken in response to a stronger pull from the moon. The increased density can only be explained as being the result of something beneath the ice that is heavier in that area. This, along with the waterworks display, has led scientists to believe that there may be a large sea around the south pole. This ocean has been estimated to be around the size of Lake Superior.  For any kind of life that we know to be possible, water is needed.  The fact that there is water present  on this small moon of Saturn, suggests that Enceladus could host alien life.

On the whole, Enceladus is a tough sell as any kind of tourist destination. It is a small, frozen wasteland, only about 314 miles across. It would seem to be too small to hold a vast reservoir of water under its icy shell, but it does have a rather special attribute to generate heat. Enceladus is stuck in a three-way orbit between Saturn and Dione, a larger moon. Dione pulls on Enceladus, forcing its orbit into an elliptical ring. But it is this pull from its two neighbours that allows poor Enceladus to generate enough heat to make water possible.

However, Enceladus is not the only moon to exhibit the possible conditions to support alien life. Jupiter’s moon Europa, is also thought to house water under its skin. It has the added bonus of showing signs of volcanic activity in the past as well. Jupiter’s other bosom buddies Ganymede and Callisto also have showed signs that they may have water. But, the conditions on Enceladus are primed to create life, as the other moons have water that is sitting on levels of underwater ice, whereas Saturn’s baby moon has water over the silicate core. Silicate is known to be a mix of salts, phosphorous and sulfur, which, in the right cauldron, could allow life to bloom.

The probe Cassini arrived in the region of Saturn in 2004 and is  said to be scheduled to crash into the gas giant in 2017. Scientists are now hoping to devote a large part of its remaining time to further exploration of Enceladus. They are hoping to find out more to support NASA’s theory that the moon could possibly host alien life.