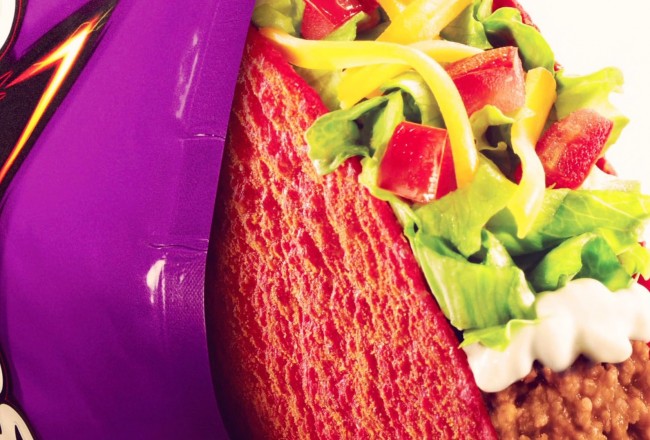 Taco Bell came out with the Doritos Locos Taco in 2012, and since then it seems like everyone is claiming that they invented it. So far, a former intern who worked for the corporation in 1995, a man with a dream on Facebook, and a federal prison inmate have all come forward. All of them seem to have invented the product in their own right, and are stepping forward now that the Mexican food giant is making billions of dollars off of the invention.

Former Taco Bell intern Andrea Watt says that she created the idea for the taco almost 20 years ago in 1995, and she says that she wants some credit where credit is due. Watt says that she invented the product as part of a contest among interns to design new foods for a line of appetizers called “Mexitizers.” She was part of a team that consisted of Roy Brown, Mark Rader, and an unidentified fourth member.

Watt has counter card mock ups, poster designs, and even photos of herself and her other team members pitching the product. Her case is solid. An official letter from then Senior Director Paul Rosenthal about the product, dated Aug. 21, 1995, is addressed to Watt. It reads, “I think Frito Lay would appreciate it if you call the product by the brand name.” She has been carrying around the pitch items, photos, and other proof for almost 20 years. Perhaps somewhat ironically, she now works for a company that trains others in leadership and sales techniques.

Andrea Watt was not the only one to create the unique food item. The unique item from Taco Bell really does seem to have been invented by everyone, or perhaps everyone just has Doritos on the mind.

Todd Mills independently dreamed up the idea somewhere around 2009. He wrote to Frito Lay in order to pitch the idea, but they rejected it. After the rejection, Mills did not give up, and instead created a Facebook page to advertise his idea for the new shells. He created lots of Photoshopped images featuring the cheesy shells, and eventually caught the eyes of Taco Bell executives. Mills was eventually flown out to a test site to try one of the new Doritos-inspired creations from the fast food giant. Reportedly, he did not ask any payment for his ideas, and insisted that he only wanted to see the new shells on the fast food menu. He later died of brain cancer. The corporation donated $1,000 to his cause, but friends have since commented that the sum was insulting.

The creation of these food wonders does not stop with Mills. Yet another man has stepped forward claiming to have created the best-selling food item. At one point, 1 million of the Doritos-inspired masterpieces were sold every day around the world.

Gary Cole is currently serving a 25-year sentence at a maximum security prison in Colorado, and he filed a lawsuit last year that claims he invented the idea for the new shells. Cole claims that employees of the United States Postal Service found the recipe in a certified letter to his family. He then claims that these workers must have submitted the recipe to Frito Lay. Cole filed the lawsuit representing himself, and he also contacted the IRS and FBI. Nothing substantial has come from his allegations, other than a statement from Taco Bell Spokesman Rob Poetsch. Poetsch says that the corporation could never have accepted any such recipe, because, “as a policy we do not accept unsolicited ideas. Period.”

Andrea Watt, Todd Mills, and Gary Cole all seem to have invented the groundbreaking new menu treat in their own right. Some inventions just have their time. For instance, Marconi and Tesla both invented the radio at about the same time in history. Alexander Graham Bell and Antonio Meucci both seem to have came up with the telephone, but Bell was the first to obtain the patent. As for the Doritos Locos treat from Taco Bell, well, it seems to have been invented by everyone. It was just simply the right time for it to emerge when it did.