The Pharrell Happy Song Has a Sad Outcome

By Schelett Rickenbacker on April 29, 20142 Comments 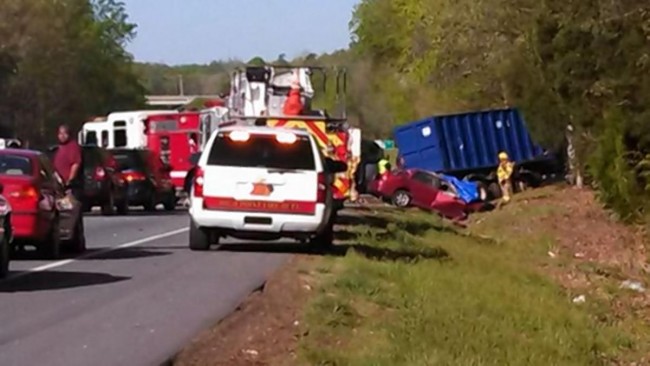 For the first time since the release of the Parrell Williams song “Happy”, there has been a sad outcome. A North Carolina woman died in a horrific car accident on the way to work, after texting about being happy. High Point Police were informed about the accident around 8:34am.

When police arrived on the scene, there was a car in flames and a truck rammed into a tree. Often times when people hear of situations like this they are under the assumption that alcohol, drugs, or speed was the determining factor. That is the same assumption the High Point Police made until they assessed the situation. After a brief investigation, they found that there were no drugs or alcohol in her system. They were baffled, because then they had no clear understanding of how this accident occurred.

While Sanford was driving down the highway the car drifted over the median into on coming traffic. Then her car collided with another one going full speed. Police note that the impact of the collision had to be extremely strong, because Sanford’s car immediately bursts into flames, and the truck was forced off the road. She was the sole occupant in the vehicle. 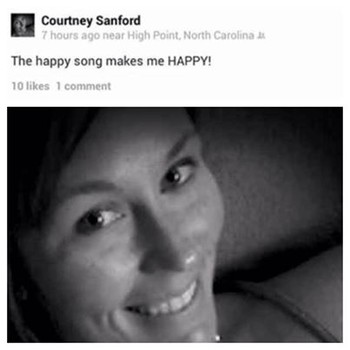 Lieutenant Chris Weisner reported that this young woman identified as, Courtney Ann Sanford died after taking a selfie, and posting a update to Facebook stating, “The Happy song makes me HAPPY.” In a matter of a minute she ran head on into a recycling truck. The distraction from posting a Facebook update at 8:33 am cost Sanford, her life at 8:34 am. This incident is being referred to as a real life ‘don’t text and drive’ PSA. Many would argue that this could be attributed to our “microwave society”. It relates to the need to share and receive information instantly, with the idea that everyone should know right now.

Friends of the victim notified officers that Sanford’s post that day happened at the same time as the accident. She was allegedly taking multiple selfies while driving down the North Carolina highway prior to the collision. However, it became evident to the police that uploading pictures behind the wheel was normal behavior for her. Sanford may have been in a happy mood, but she could have waited to tell everyone.

At the wake of this situation Lt. Weisner is taking the time to remind people to pay close attention to the road. The only thing important when driving a car is driving the car. Lt. Weisner was quoted giving some words of caution. “In a moment of seconds, a life was over just so she could notify some friends that she was happy. ‘its really not worth it’, said Weisner. As sad as it is, it is also a grim reminder for everyone. You just have to pay attention while you’re in the car.”

Though, they have not clarified how fast she was going it is a key factor. A car traveling at approximately 60 mph goes 88ft per second, and 1 mile and minute. Therefore, when Sanford looked away for a minute to post on Facebook her car traveled 1/3 of a city block.

Most people are aware of the dangers of drinking and driving. Hopefully this situation creates the necessary awareness surrounding texting and driving. It is important to remind people of the campaign slogan “It Can Wait.”

2 Responses to "The Pharrell Happy Song Has a Sad Outcome"