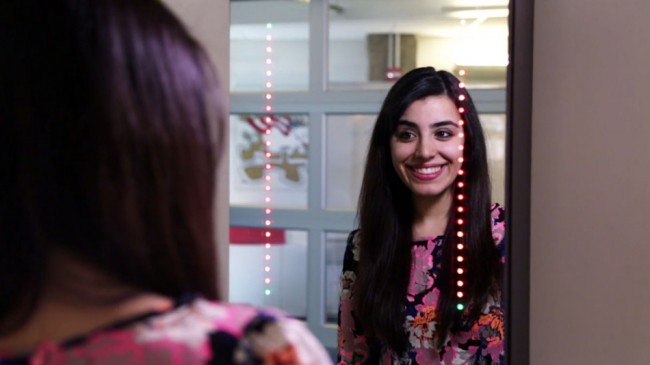 Twitter mirror on the wall, whose selfie is the fairest of them all? Digital agency iStrategyLabs has come up with a new technological spin on an already trending idea. To appeal to the narcissist within, the agency has invented a mirror which will snap a selfie for you and tweet it to the social media outlet, Twitter.

IStrategyLabs, a digital agency, founded by Peter Corbett, that invents ways of communicating online and off, came up with the two- way Twitter mirror idea. The gizmo uses a cabinet, with a mirror attachment placed on a hinged door. The mechanism is very similar to the mirror in your bathroom, except behind the door are the technological gadgets of the device’s concealed camera, as opposed to your own personal paraphernalia.

To operate the device you simply need to stand in front of the mirror then smile, pose, snap and tweet into the Twitter-Verse, it’s as simple as that. The facial recognition software is powered by a Mac mini which is linked to a webcam.  Smiles for your Twitter Mirror selfie are detected in less than one and a half seconds by an OpenCV facial recognition library, which is then sent to an Arduino to begin the countdown process.  Smiling will cause hidden LED, behind the mirror, to illuminate in order to initialize the flash mechanism.

Zach Salle, Director of Operations for iStrategyLabs, stated that audio is also added to the device by the use of a small USB speaker that sends an alert when the image has been snapped, afterwards the image will self -tweet to Twitter. The modified IKEA medicine-mirror- photo- cabinet uses an acrylic and glass coating on its surface that has been tested for safety.

The selfie mirror was completed in three weeks after its conception came about by “playing around with facial recognition technology,” says iStrategyLabs CMO, DJ Saul. The company intended to create a fun experience triggered just by a simple smile. “The selfie mirror helps to demonstrate what’s possible by bringing together hardware, software and a great idea,” Saul commented.

Advancements in technology such as the camera phone and the importance of social media have now help to launch the selfie phenomenon into popular culture where everyone can become a viral star. Pseudo celebrities like Kim Kardashian, and almost everyone in the social media realm, like Twitter and Facebook are a part of the selfie craze in one way or the other.  It’s very doubtful though, that the likes of Kardashian will be investing in the Twitter Selfie Mirror, because she would have to smile, and who smiles in a selfie?

There has not yet been any indication if the Twitter Selfie Mirror will retail on the market anytime soon, or how much it would cost. The company, iStrategyLabs, that also invented the pre-selected pizza ordering app PiePal, is located in Washington DC, New York City and other locations across the globe. The company creates innovative ideas for brands like Volkswagen, Honest Tea, General Electric and American Eagle. The iStrategyLabs’ creative team relies heavily on social media, like Twitter, to implement its innovations in experimental marketing.