A 22-year-old woman died following a late-term abortion at the Preterm Abortion facility in Cleveland, Ohio. Lakisha Wilson was transported to University Hospitals Case Medical Center on March 21st around 11:30 a.m. According to a statement released by the Cuyahoga County Medical Examiner’s Office, Wilson was treated at the hospital and pronounced dead on March 28th.

Eyewitness accounts agree with a recorded 911 call which indicated that Wilson was not breathing when she left the abortion facility. While she lay on the gurney emergency personnel did not make obvious efforts to resuscitate her.

One witness, Mary Fuerst, said she was praying hard as she watched Wilson’s body being wheeled out of the abortion clinic. She said it was very cold outside and Wilson’s stomach was not covered. Fuerst said it was very shocking because she could see that this 22-year-old woman was “very” pregnant.

Another witness, a retired dentist, said he was two feet from the gurney and recognized Wilson was dead. Dr. Richard Ivan said he was standing very close when she was brought out of the abortion clinic. He said he saw no mask on her face or protection over her head. There was no rush getting the woman to the hospital. Ivan said even as the ambulance left the facility the siren was not activated nor were the lights flashing as Wilson was taken to the hospital.

Wilson was immediately placed on life support once she arrived to the hospital in order to save her organs but was already declared brain-dead. Although the cause of death is pending an autopsy, there is every indication that Wilson’s death was caused by the lateness of her abortion. 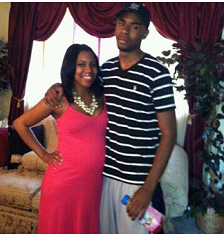 Prior to her visit to Preterm Wilson had been denied by other abortion clinics in Akron and Columbus, Ohio due to the late stage of her pregnancy. While it is not confirmed how far along she was there are pictures of her on Facebook where she is definitely showing. According to Preterm Abortion’s website this facility conducts surgical abortions up to and through 22 weeks of pregnancy.

Records show that on March 21st as 10:59 a.m. one of Preterm’s employees called 911 to report a 22-year-old female patient who was at their clinic but was not breathing. The caller told dispatch that the patience was receiving CPR but was unconscious at the time of the call. The employee also reported that efforts to restart respiration had not been successful.

Wilson’s CAD transcript lists the events surrounding the emergency in chronological order. It showed an ambulance had been dispatched moments after the start of the 911 call. The paramedics arrived to the clinic within three minutes and at 11:02 began medical procedures.

The CAD transcript contained the notations “Not breathing at all” and “Cardiac or Respiratory Arrest/Death” along with the 9-E-1 code, which is the most serious of life-threatening medical emergencies. There was no indication during the 28 minutes that the emergency workers were with the patient that she had ever resumed breathing.

Another witness on the scene, Pastor Dale Henkel, took photos and a video of the incident. The video showed Wilson as was being wheeled out to the ambulance. During this time emergency workers were not performing any type of treatment on her.

Lakisha Wilson died after having a late-term abortion performed at the Preterm Abortion facility in Cleveland, Ohio. The 22-year-old African-American woman was transported to University Hospitals Case Medical Center where she was placed on life support a week before being pronounced dead.