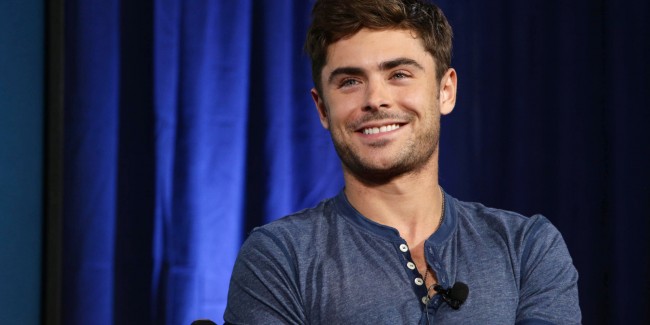 Proving that he does have a body for all the girls to swoon over, Zac Efron stripped at the MTV Movie Awards. It was not completely by choice though, as Rita Ora helped him out of his shirt.

The former High School Musical star proved that he was no longer the high school heart-throb and was now a man. He won the award for the Best Shirtless Performance, and Ora wanted to see what it was all about. The rest of the audience wanted to see it again, too, and cheered as he took the stage to receive his award.

Efron allowed Ora to rip the top buttons of his shirt, before finally taking the whole thing off himself. He then allowed the audience to take in every inch of his chiselled abs and chest. He later took to Twitter to thank Ora for helping him out of his shirt, admitting that he probably would not have done it without that initial encouragement.

Throughout the whole thing, Jessica Alba was on the stage encouraging the crowd to continue chanting for the That Awkward Moment star to strip. She also wolf-whistled as he took the stage to take the gong. She and Ora had the chance to pose for a photo with the heart-throb afterwards, and they could not help but point out his figure.

However, Efron had to deal with more than stripping at the MTV Movie Awards. During the night, Alba mispronounced his name. Instead of pronouncing it “Ef-ron”, she pronounced it as “Eef-ron.” It could have been worse, but one would think that she would have figured out the pronunciations of all the nominations before putting herself in that situation.

Taking his shirt off seems to be something that has put minds at ease. His friends had been worried lately about his partying ways, considering he has just come out of rehab for drinking problems. He has also been involved in fights that have led to questions over whether rehab really has helped him.

The 26-year-old was up against some tough competition for the award. Chris Hemsworth was one of the nominations for his role as Thor in both movies surrounding the Marvel superhero. Sam Claflin for his role in Hunger Games: Catching Fire and Jennifer Anniston for We’re the Millers were also big names up for the award.

Efron had realized just how big the competition was, and let himself in for taking his shirt off. He announced on March 8 that if he beat Hemsworth then he would show off his six-pack on the stage. Fans would not let him forget that tweet, and neither would Ora.

Fans of the High School Musical actor will get to see his half-naked body in The Neighbors, which is in theaters on May 9. During an interview for the show, he admitted that he did push-ups just before filming to make sure his body looks perfect for the camera. It just goes to show that men worry about their appearance just as much as women. Efron definitely keeps his in shape, and showed that by stripping at the MTV Movie Awards.