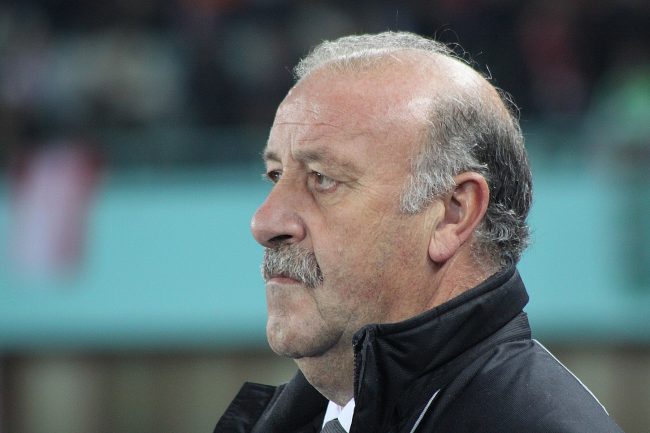 Spain boss Vicente del Bosque has been dealt a major blow ahead of naming his final squad for the World Cup in Brazil after Atlético Madrid striker Diego Costa limped off after just 16 minutes in the title decider against Barcelona. The Brazil-born striker, who last year opted to play for Spain despite having already appeared for his native country, left the field in tears after aggravating a hamstring injury.

Although Atlético will take solace from the fact their 1-1 draw with Barcelona handed them the La Liga title – their first since 1996 – it is potentially bad news for Diego Simeone, who face bitter rivals Real Madrid in the Champions League final at the weekend. Costa netted 27 goals league goals this season and had only just returned to the side after injury.

Although hamstring injuries vary in terms of recovery time, the fact Costa came back to early and made a previous injury worse could mean he will need more time out than expected. Del Bosque is now sweating over his key striker’s fitness ahead of whittling down his 30-man squad to one of 23. The timing of the injury could not have provided a bigger blow for the club and country as Atlético aim for Champions League glory and Spain looks to defend its World Cup title in Costa’s birthplace.

Chelsea striker Fernando Torres is one of few recognized strikers available, as Spain usually opts for a host of attacking midfielders to provide the firepower. Although Torres’ international record is decent, he has just finished yet another disappointing season for Chelsea. His manager José Mourinho was very critical of the club’s strikers during the season, blaming their shyness in front of goal for not winning the title. Samuel Eto’o, who has now left the club, has been equally vocal about Mourinho’s failings as a manager since leaving at the end of the season.

Costa’s injury will also come as a major disappointment to Chelsea boss José Mourinho – the two clubs have reportedly agreed a £32 million deal for the player to move to London after the World Cup. The player is now undergoing round-the-clock treatment in order to get him fit for the Champions League final in Lisbon. However, both del Bosque and Mourinho may both be secretly hoping the player is not risked again before the World Cup  – aggravating the injury even further could see Costa ruled out of the game for some time.

Missing either or both the Champions League final and the World Cup would also be a massive personal blow for Costa, who was instrumental in helping Atlético break the stranglehold of Real and Barça. Only the latter two had one La Liga over the past 10 years. Having lost Radamel Falcao to Monaco last year, Simeone is now preparing for life without Costa. He managed the loss of the Colombian with some aplomb and it would take a brave man to bet against him doing it again post Costa. Still Costa remains Atlético player and Simeone needs him to be fit for the biggest Madrid derby of all time. The clock is ticking for Costa, Atlético, Spain and even Chelsea.

World Cup Preview is a series providing commentary and analysis of the teams and players participating in this year’s World Cup in Brazil.