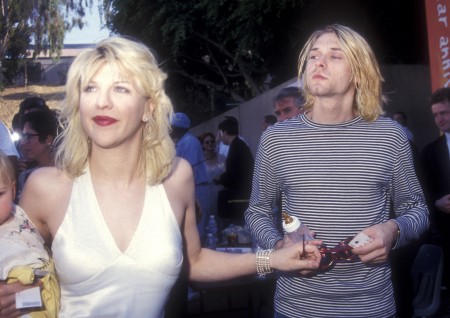 According to Cobain expert Charles R. Cross, Courtney Love sent him an email in which she confesses that she wrote the “Lawful shredded wife” note that had been attributed to the late Kurt Cobain. After the almost 20 years since the Nirvana singer’s body was found in what police described as an “apparent” suicide, CBS News released pictures of the note found in the dead singer’s wallet on the day of his death by shotgun.

Kurt’s body was discovered in his Seattle residence on April 8, 1994. Investigators at the time concluded that Cobain had gone into his home’s greenhouse and shot up with an “massive” dose of heroin and then shot himself with a 20 gauge shotgun in his garage. The note was part of evidence released in the runup to the 20 year anniversary of the singer’s death.

A Seattle detective examined the recently released evidence from the existing case file and concluded that the official verdict of suicide was still applicable. The 27 year-old grunge rocker and his band Nirvana, who were inducted in the Rock and Roll Hall of Fame in April this year, sold millions of albums before his untimely death. Police may still believe that Cobain took his own life, but at least one person believes Kurt was helped by the self-confessed author of the note, Courtney Love.

49 year-old Love’s estranged father, and former manager of the Grateful Dead, Hank Harrison claims that even though he cannot definitely prove it, he believes his daughter was involved with Cobain’s death and that he can back it up it with a “high degree of certainty.” Harrison, who is actually banned from seeing his granddaughter Frances Bean Cobain, says he feels certain that, while she may not have pulled the trigger on the shotgun, she shares his own sociopathic personality and was surely capable of causing Cobain’s death.

Harrison, who believes the Seattle police department made up their minds that Cobain had killed himself before they even inspected the crime scene, has said that the book he wrote in 2011, Love Kills: The Assassination of Kurt Cobain as an ebook, will be updated with proof that his daughter was responsible for Cobain’s death. He swears that if people read the “true meaning” of the short note, which contains the lines “lawful shredded wife” and b*tch with zits, that they will see that something “dire and awful” took place which resulted in the singer’s death.

Harrison claims that the new evidence released by CBS, which includes 35 previously undeveloped photographs, was not made public 20 years earlier because the police decided that the Nirvana singer had committed suicide so further evidence was not required.

Cobain author Cross says that even before Courtney Love confessed to writing the short note found in Kurt’s wallet that it had very clearly not been written by the deceased singer. The biographer also said it was indicative of the type of short letters and notes that the couple wrote to each other all the time when they were first married. Love’s father Hank Harrison claims that the note proves that she was instrumental in Cobain’s death.