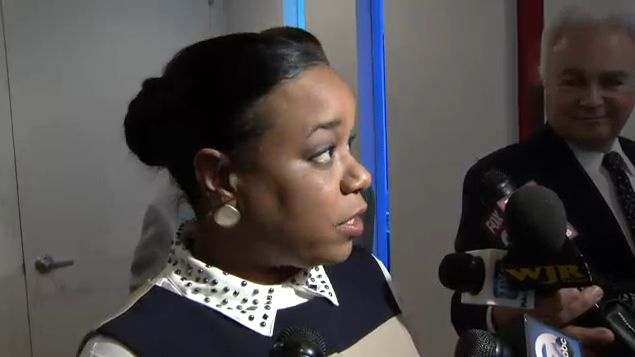 A Detroit teacher gained national attention when she used a broom to break up a fight between two students in her classroom. She was initially fired over the incident, but was recently rehired. While she was offered a job at the same school, she will likely choose another position within the district for the best interest of everyone involved. Now she is using her platform, however, to push for better security in the schools and to have backups plans in place for the safety of the students and the teachers.

The incident took place in a classroom at Pershing High School in Detroit on April 30. Two students were fighting and it turned into an all out brawl. The kids were all over the classroom, knocking over furniture and throwing punches at each other. The video that another student took shows utter chaos, with the two kids out of control, desks being thrown about and other kids screaming.

The protocol for a fight like this is for the teacher to call security to handle the fight. Unfortunately for this English teacher, Tiffani Eaton, her radio was broken so she could not call for backup. No help was on the way and she had to protect herself, the two kids involved in the fight and the rest of the kids in the classroom. She grabbed the first thing she saw, a broom, and intervened by whacking at them with it to get them to stop. While some may see her actions as heroic, others felt it bordered on child abuse.

Instead of supporting the Detroit teacher, or perhaps giving her a verbal warning, the school fired Eaton over the incident, stating that she went against their corporate punishment rules. The students and their parents supported the decision to let her go, saying that she should have followed protocol and waiting for help from security. When asked, “What if they had a gun?” one parent said she should have run into the hallway.

Yet Eaton had a outpooring of support. The community has backed her and supported her decision to break up the fight. There was also a petition circulating that gained over 2,000 signatures.

Under the Michigan school code, teachers are able to use “reasonable force” on students for the purpose of self-defense, defending other students or to stop a disturbance that could result in an injury. Eaton felt that she did just that. She hired attorney Jeffrey Lance Abood from Abood Law Firm in an attempt to get her job back.

After an independent investigation, the Education Achievement Authority of Michigan (EAA) said that the Detroit teacher could return to work, either at Pershing High School or another school of her choosing in the same district. Eaton said that she appreciates the EAA owning up to their mistake and acknowledging that they made the wrong decision earlier. The district made this announcement Tuesday, also saying that she would receive retro pay for the time she has been off. Principal Gregory King said it “seemed illegal” and that the incident had not been properly investigated at the time, but they are making things right now and offering her job back.

The Detroit teacher feels “vindicated” that she got her job back after being wrongfully fired over breaking up a fight with a broom. There is no telling if the kids had a knife or a gun and how far the fight could have escalated had she not intervened. Her goal now is to use the attention she has gained to push for better security measures and training. She said that there needs to be more than a one-step plan in place. There needs to be several backup plans in place so teachers are better equipped to handle  incidents in their classrooms and be able to protect everyone involved.

Detroit Teacher Who Stopped Fight With a Broom Pushing for Better Security added by Tracy Rose on May 15, 2014
View all posts by Tracy Rose →