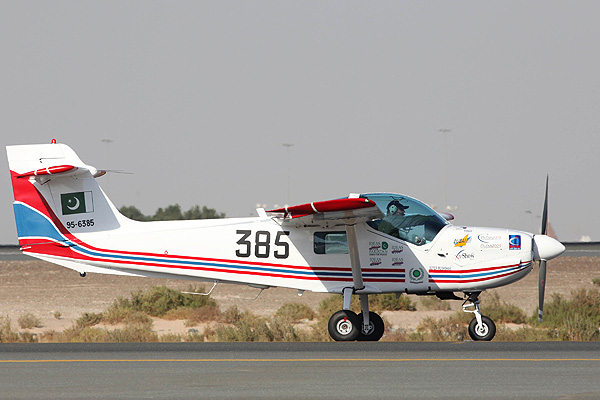 Iraq like its neighbors Iran, Syria and Saudi Arabia, has placed an order with Pakistan to buy MFI-395 ‘Super Mushshak’ trainer aircraft.  Pakistan’s Prime Minister Nawaz Sharif in a high level meeting with Iraqi officials committed to extend full support to Iraqi Defense Forces in imparting necessary training to its personnel and development of infrastructure to meet Iraqi security needs. The Prime Minister apprised visiting Iraqi officials that Pakistan Air Force has one of the best aviation training institutes and training staff in the world. Pakistan has been assisting friendly countries in aviation training since long, and can help Iraqi Air Force attain new heights of professionalism by training its personnel to meet modern day warfare challenges.

The air forces of Pakistan and Iraq have endorsed signatures on two agreements. The first one deals with training of Iraqi Air Force personnel and the second one is a sales contract for supplying twenty Super Mushshak MFI-17 aircraft to Iraq. To meet the current sales order, manufacturing shall soon commence at Aircraft Manufacturing Factory (AMF), Pakistan Aeronautical Complex, at Kamra. Former customers of the aircraft include Denmark, Norway, Sierra Leone, Zambia, Iran, Oman, Syria and Saudi Arabia.

The trainer aircraft being exported by Pakistan is a two seat (with option for a third rear seat) propeller driver aircraft. It was originally designed and built by Swedish company SAAB as MFI-17 ‘Safari Supporter’. However, when SAAB stopped production of the aircraft, Pakistan initiated under license manufacturing of the MFI-17 aircraft by the name of ‘Mushshak’ (Proficient).  The aircraft has proven to be an effective trainer aircraft and has been adequately serving the needs of Pakistan Air Force and Pakistan Army.

The original ‘Mushshak’ (MFI-17) has undergone significant metamorphosis, and the latest version called the ‘Super Mushshak’ (MFI-395), incorporates a 260 HP (horse-power) Textron Lycoming engine, a state of the art glass cockpit featuring the Garmin 900X (on NG version), dual controls and an efficient fuel injection system. In recent years, the Super Mushshak has performed at the Dubai Air Show leaving spectators quite impressed with the agility of this small trainer aircraft and its glass cockpit suite. Middle Eastern countries like Syria, Iran, Qatar, Oman, Jordan and Saudi Arabia have showed interest in placing orders for Pakistani manufactured aircraft, which are economically more viable with performance equivalent to compatible western aircraft.

The Super Mushshak is an excellent platform for imparting basic flight training, formation flying, instrument and navigation flying. It features six hard-points beneath its wings which can accommodate a variety of small rockets, bombs and gun pods, if the need arises. The aircraft possesses essential capabilities of a basic COIN (Counter-Insurgency) aircraft and its predecessor models were deployed during the Biafran civil war. Similarly, Iraq would have the option of using its fleet of Mushshak aircraft to complement its counter-insurgency efforts.

Super Mushshak was bought by Syria, Iran and Saudi Arabia a few years back and these countries have successfully deployed the Pakistani built flying machine for primary training of its defense forces pilots. Pakistani aircraft manufacturing capabilities have enhanced over the years with the co-production of K-8 jet trainer aircraft and JF-17 ‘Thunder’ multi-role fighter aircraft, in a joint venture with China. Pakistan has stepped up its efforts to solicit aircraft orders from friendly countries in the Middle East and beyond to bolster its aircraft production capability and brand recognition in the regional market.