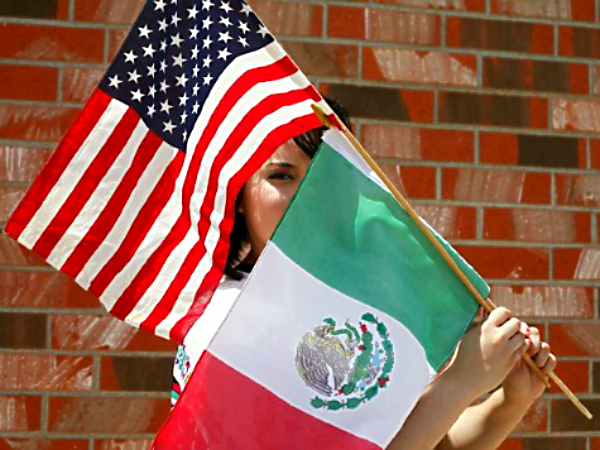 In a recent report published in Pew Research Center, more immigrants now hail from Mexico than Germany, in which the latter was the leading country where people came from between 1850 to 1960. Among 42 million immigrants that come to the United States each year, over 12 million of them are from Mexico with India, Russia, and China trailing behind at 11.8, 11.2, and 8.4 million, respectively, according to the Global Religion and Migration Database 2010. Compare to the demographics in 1910 in which only three states had the highest number of immigrants hailing from Mexico; Texas, Arizona and New Mexico. Mexican immigrants dominated 33 states in 2010.

Slate also showed a map depicting Spanish the most common language spoken in the U.S. after English in almost all 50 states, based on the Census Bureau’s American Community Survey. When Spanish and English are removed, German became the third most common language in the U.S. where most of the language is spoken in the mid-western and central states, such as Idaho, North Dakota, Indiana, Ohio, and Colorado.

Since the U.S. Congress passed legislation (Immigration and Nationality Act of 1965) to open the country’s borders, immigrants flooded into the States, particularly those from Asia and Latin America. Since then, the number of Mexican immigrants have increased to over 12 million. Mexican immigrants peaked in 2000 with about 770,000. Since then, the number dwindled down to about 140,000 in 2010, according to Pew Research Center. Many factors contributed to this decline, including heightened border enforcement, rise in deportations, weakened U.S. economy and job markets, and increasing dangers in illegal border crossings. Despite the decline of the number of immigrants, the U.S. today has more immigrants hailing from Mexico than any other country in the world, including China and Germany. Currently, Mexican immigrants make up about 30 percent of all U.S. immigrants while China, including Taiwan and Hong Kong, constitutes a humble five percent of the country’s 42 million immigrants.

Throughout American history, there had been different peak demographics that immigrated to the U.S. During the Gold Rush years, Chinese immigrants peaked at almost 40 percent in California in 1860. In 1910, the most the number of immigrants in New York and New Jersey hailed from Russia and the USSR at 30 percent and Italy at just over 26 percent, respectively. Today, four states have a highest population of Mexico-born immigrants: 72.4 percent in New Mexico, 60.2 percent in Arizona, 59.7 percent in Texas, and 53.5 percent in Idaho.

In the next 50 years, the U.S. Census projected that the largest growth in population will be among the Hispanic population, which would more than double from 53.3 million in 2012 to almost 129 million by 2060. By then, almost one in three American residents would be Hispanic, compare to one in six today. Non-Hispanic Whites are project to peak at barely 200 million by 2024, however, this population will gradually decrease by 20.6 million from 2024 to 2060. Blacks will increase slightly from just over 13 percent in 2012 to 14.7 percent in 2060. Asians will more than double their population from just over five percent 2012 to 8.2 percent in 2060.

While more immigrants are hailing from Mexico than Germany and other European countries, some states, such as West Virginia, New Jersey, and Pennsylvania, see an invasion of immigrants from India instead of Mexico in which one-in-ten immigrants hail from India. Filipinos make up about 45 percent of the immigrants in Alaska and 30 percent in Hawaii. In New Hampshire, Vermont, and Maine, however, little has changed in the last hundred years; Canadians make up the largest number of immigrants.

More Immigrants Hail From Mexico Than Germany added by Nick Ng on May 29, 2014
View all posts by Nick Ng →

One Response to "More Immigrants Hail From Mexico Than Germany"