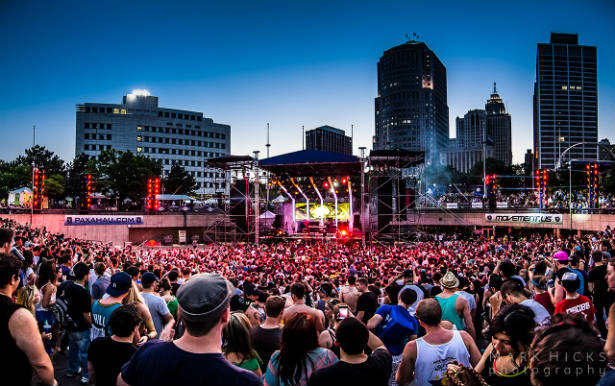 Now officially in its ninth year, the Movement Electronic Music Festival in Detroit has made a name for itself entertaining Electronic Dance Music (EDM) lovers around the world. For fans of the EDM genre, Detroit is the place to be this weekend for good music, good company, and a great techno party. The Movement festival, a three day electronic dance fest held from May 24-26, is a celebration of music, talented artists and Detroit and it is drawing EDM fans worldwide.

Detroit has consistently played host to two electronic music festivals over the summer: The Movement Electronic Music Festival, usually in May, and the Detroit Electronic Music Festival (DEMF), which is usually scheduled for June or July. After some mild confusion about whether the Movement Festival would still take place after the DEMF was canceled earlier this year and subsequently rescheduled for next summer, managers of the EDM fest clarified that Movement would indeed go on as planned over the Memorial Day weekend.

Detroit, the birthplace of the techno genre, welcomed 107,000 guests worldwide for the The Movement Electronic Music Festival in 2013. However, Movement may outdo itself this year, according to its planners, and will be drawing even more EDM fans worldwide. This weekend’s festival promises to be the best one so far, festival organizers said.

It very well may be the best EDM yet as the festival has continued to grow every year. This year it is replete with five outdoor stages and over 100 artists, including new talents, seasoned professionals and local DJs. There is also a VIP area and with official after parties, the festival is bigger than it has ever been before. Additionally, Movement is held in Detroit’s Hart Plaza which is on the Detroit Riverfront and boasts easy access to some of Detroit’s best bars, pubs and attractions for visitors to explore.

The festival hosts plenty of well deserving electronic music artists who gain valuable exposure through this festival, and diehard EDM fans get the chance to see a whole new batch of techno artists who are different from the mainstream. This year’s festival lineup, however, will still have plenty of familiar faces to EDM fans who follow the community closely. A few of the acts this year for the phase one lineup of the festival, which were revealed in late 2013, include Carl Craig, Tale of Us, Mike Huckaby, Project 313, Monoloc, DJ Sneak, BMG, and Black Asteroid. Additionally, 45 more acts for the phase two lineup, which were announced in early February of this year, include DJ Godfather, Konkrete Jungle Detroit, Green Velvet, Move D, RiFF RAFF, and Ryan Hemsworth.

Organizers stress that the oft-perceived notion that techno fans are primarily young people who participate in EDM drug culture is not an accurate perception of the event. Most fans understand that the Movement Electronic Music Festival is more centered around community entertainment than getting high and waving glow sticks although a certain percentage of attendees at this type of event will engage in those activities. The festival draws people together to enjoy good techno artists, some who get their only exposure through the festival, but who also know their craft. As EDM is such a huge draw, clearly fans find the experience worth the time and money invested to attend the event. The music fest is also centered around a mutual love of Detroit and a celebration of the city that it has long deserved. EDM fans who come directly from the city are able to share this love and sense of community with the fans from all over the world who have come to attend one of the biggest Electronic Dance Music Festivals of the year.