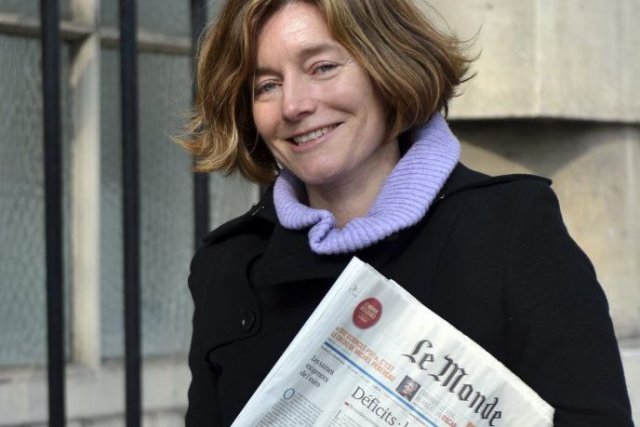 Natalie Nougayrède, Le Monde’s fifth editor in chief quit amid reports of discord and power struggle earlier on May 14th. The editor in chief of the French newspaper who held the coveted position for over 14 months seemed to be quite the revolutionary when she took the position earlier last year. Nougayrède, who had plans for the future for Le Monde, is bearing the ire of staff members who do not support her ideas to push the newspaper into the digital era.

Following the sudden death of Erik Izraelewicz, Nougayrède, a respected foreign correspondent, was chosen to lead Le Monde. Voted into the position by over 80 percent of the staff who retain the right to choose their own editor, Nougayrède decided to lead France’s leading newspaper into the digital age. An advocate of investigative journalism, she was known for her extensive work on the Chechen conflict in Eastern Europe and for leading teams of journalists into investigations of stories on Syria’s use of chemical weapons and Edward Snowden’s infamous leaks. With laurels like these it is startling to find that Nougayrède’s issues stem from the same people who hired her.

In her attempts to aid Le Monde gain a foothold since it lost out to digital media, Nougayrède decided to push the transition from the print version to the digital media a little more strongly than most would have chosen to. This move required the transfer of more than 50 staff members from the print section which did not seem to sit well with the staff who claim that, although backed with an impressive resume, Nougayrède simply did not know how to run the newspaper. When two of her deputies handed in papers of resignation and seven others had done the same earlier, there seemed to be hints of trouble between the Nougayrède and the owners regarding the direction she took. Expressing discontent over her lack of management skills, failure to consult with senior editors on issues, and a rigid management style, the staff at Le Monde leaked a letter to the French media in April 2013 citing “major dysfunction” and “an absence of confidence” with newsroom management. These editors claimed that the atmosphere at the paper had turned hostile.

Posting a letter of resignation on the official Le Monde website, Nougayrède said “I no longer have the means to run it with all the necessary peace and serenity that is required.” Nougayrède, some defenders say, is subject to the harsh treatment because she is a woman and Nougayrède added that,“[they want to] reduce drastically the prerogatives of the head of paper.”

While the print staff who chose her could have declined her request to take on the role many believe that Nougayrède’s Putin-styled management turned those same staff against her. Nougayrède seems to have quit before the fight could begin. Unsuccessfully attempting to force change on the hard-nosed French print media culture and attempting to usher it into the new digital age, Natalie Nougayrède will go down in history as Le Monde’s first female editor in chief since 1944, and the first to bring about a massive image makeover.

One Response to "Natalie Nougayrède Forced To Quit Le Monde"