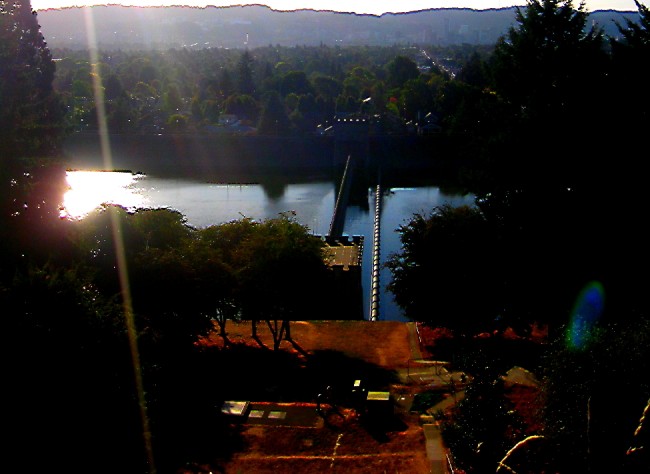 In a reversal of a plan to dump a full reservoir, Portland, Oreg. has decided to preserve the water for another use. It had been discovered that a young man had urinated in the reservoir and the city felt that this tainted the 35-36 million gallons of water and threatened to destroy the water. The reservoir in question is reservoir #6 which sits on Mt. Tabor in the Southeast quadrant of the city. Mt. Tabor, a dormant volcano, is home to a popular park and welcomes hundreds of walkers, bikers, adults, and children every day. The incident is just another in a string of stories related to Portland water politics.

The reservoir is over 100 years old and is open to the air. Birds fly over and squirrels surely drink from it. Despite this antiquated system, residents claim to have some of the best municipal water of any system in the United States. It seems to be working quite well, according to satisfied water drinkers in Portland.

Customer satisfaction notwithstanding, the federal government mandated that all open-air reservoirs for finished drinking water be covered and Portland has been unhappy about it ever since. The Long Term 2 Enhanced Surface Water Treatment Rule (LT2) was issued by the EPA to guard the public from Cryptosporidium, which causes waterborne disease outbreaks. Despite a 100-year history of having open-air reservoirs for finished drinking water, Portland has never had any such outbreak.

Portland has decided against covering its beautiful reservoirs and will opt to move the water to enclosed storage facilities, but not before applying for multiple extensions from the EPA. Despite every attempt to continue extending the deadline, Portland ran out of chances and now must follow through and move the water. Thus far, only politics has been successful in tainting Portland water.

Portland’s water supply has been a political football for the past several years. The city does not adulterate its water with fluoride, despite the fact that nearly every other municipality in the United States augments its water with the substance, ostensibly to assist dental health. While statistics show that municipal fluoride decreases the rate of fluoride in most places, Portland has seen its cavity rate decline without adding the substance to the water. In 2013, Portlanders successfully fought their own city council and thwarted a plan to pay corporations millions for the fluoride. Since denying the fluoride maneuver, the city council has yet to offer any other ways to spend that money in the service of dental health.

Now, voters will have to face another challenge to its precious water supply. Measure 26-156 is on the ballot this May and will offer voters the chance to hand their water over to private, corporate interests, or to keep the resource under control of city government. City government has been accused of mismanagement and the measure’s backers claim that private interests can do the job better and for less cost to the taxpayer.

Mayor Charlie Hales has had choice words for the measure’s backers and City Commissioner Nick Fish feels that the move is part of a wider right-wing conspiracy. Given the exceptional quality of the Bull Run watershed, and other area water sources, companies such as Nestle have vied for access, if not outright control, of the resource. As recently as 2012, the company was attempting to obtain spring water to the east of Cascade Locks, a small hamlet in the Columbia River Gorge which is approximately 40 miles from Portland.

The future of Portland water and its politics is bound to be interesting. With corporations vying for ever more control over the nation’s resources, Portland is unlikely to find itself immune to their advances. This, despite the city’s longstanding commitment to community enrichment and progressive politics.