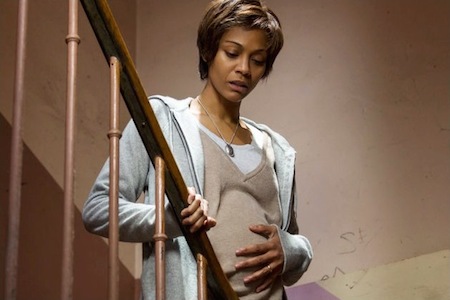 The first time the world met Rosemary; Mia Farrow portrayed the shy, naïve, housewife, who eventually started to fear for her unborn child. Torn between the thoughts of being a mother and the thoughts that her child was not really her child, but perhaps something more. John Cassavetes played Guy, Rosemary’s husband and Ruth Gordon and Sidney Blackmer played Minnie and Roman Castevet.

The reimagined version of Rosemary’s Baby will premiere Sunday, May 11, 2014, the four-hour, first part of the miniseries. The second part will air Thursday both on NBC at 9PM EST. Zoe Saldana (Star Trek Into Darkness, Aviator) stars as Rosemary Woodhouse a dancer who decides to move to Paris with the writer husband, Guy Woodhouse (Patrick J. Adams, Suits). Guym a struggling writerm takes a teaching job at the Sorbonne and Rosemary agrees to the move to support him and also to try to get pregnant again after a recent miscarriage.

Once in Paris they meet the eccentric Castevets, Minnie (Carole Bouquet) and Roman (Jason Issacs, The Patriot, Harry Potter), rich French socialities who befriends the couple and allows them to move into the vacant apartment in their lavish building in the Eight Arrondissement.

Soon after moving in the new apartment, the couple finds out that Rosemary is having a baby and what should be a happy time in their lives quickly turns into a nightmare. Rosemary quickly becomes ill and starts worrying that the neighbors are after her baby and that in fact the baby might not be of this world. Julie (Christina Cole), the couple’s best friend and Guy’s co-worker, also notices the change in Rosemary’s health and cautions the couple to be careful.

Now, NBC calls this version of Rosemary’s Baby reimagined and for many reasons it holds true to the title. The psychological thriller was written by James Wong (American Horror Story) and Scott Abbot (Queen of the Damned), Agnieszka Holland (Europa Europa, The Wire) will be directing the miniseries and this is not the ’68 version of the film.

Rosemary’s Baby was one of the first highly popular stories that introduced Satanism and mixed it with the classic mystery format, and, for the time, it was both shocking and inspiring. After the movie hit the big screen back in 1968, other occult classics like The Exorcist and The Omen was introduced and succeeded in the shock value.

The now reimagined Rosemary’s Baby has the potential to be as great as its predecessor, but like with all remakes it is a 50/50 split in either direction. So far the critics seem to also be split, some feel like it is a great accomplishment, while others consider the version to be boring in comparison to the original. Either way the world will soon be the judge and it will either be a hit or a complete miss.