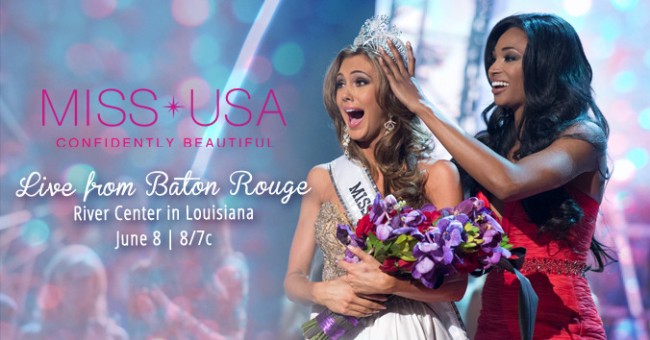 The Miss USA pageant (NBC, 8:00 p.m. ET) will showcase 51 of the most beautiful young women in the United States, competing against each other to win the Diamond Nexus crown and become the Miss USA 2014! The contestants are from each of the 50 states, and one additional one from the District of Columbia.

The competition will take place this year in Baton Rouge, Louisiana, at the Baton Rouge River Center, and will be one hour longer than usual, to give viewers the opportunity to get to know some of the contestants at their homes better, “and competing for the Miss USA title,” according the the Miss USA organizers.

The 20 semifinalists will have been chosen before tonight’s Miss USA pageant begins, based on preliminary rounds. They will compete in rounds where they will be judged based on criteria such as their appearance in evening gowns and bikinis, displaying talents like singing or playing musical instruments, and also their ability at answering a challenging interview question presented by the judges. The young lady who ends up with the highest cumulative scores will be presented with the Diamond Nexus tiara by the 2013 Miss USA, Erin Brady, who was Miss Connecticut USA.

The hostess of the 2014 Miss USA pageant, which will mark the 63rd annual Miss USA pageant, will be Giuliana Rancic, who also hosted last year’s pageant. Acting as emcee and also returning from last year will be Thomas Roberts, who is a news anchor for MSNBC. Musical guests will include Florida Georgia Line, Marc Broussard (singer of Home), and Nelly.

Last year was the first time that the Miss USA title was won by someone from Connecticut. She won when the Miss USA pageant was held in Las Vegas, Nevada. The state that has produced the most Miss USA winners is Texas, with a total of 9 so far. Will this year be the tenth time someone from the Lone Star state is the winner?

Besides winning the crown and the title, Miss USA will get a salary, additional money for living expenses, and an apartment to live in while she is in New York City. Though she will have to give the crown that she wins to next year’s Miss USA, she will be given a less expensive version to keep as her own.

The judges will be Lance Bass, Randy Couture, Ian Ziering (from 90120), Dolvett Quince, Allie LaForce (Miss Teen USA 2005 from Ohio), Barbara Palacios (Miss Universe 2006 from Venezula), Rumor Willis, Melissa Peterman, and Karl Malone. Though the Miss USA pageant has had a long history with Baton Rouge, there was a hiatus following the aftermath of Hurricane Katrina.

This year, the 2014 Miss USA pageant will be broadcast live from Baton Rouge, which has become known as the “Capital City.” The pageant coverage will highlight the growth of the city and its numerous entertainment attractions and history, all of which makes it a great destination for tourists an a terrific place to live. People from 70 different countries and territories will be watching the broadcast.