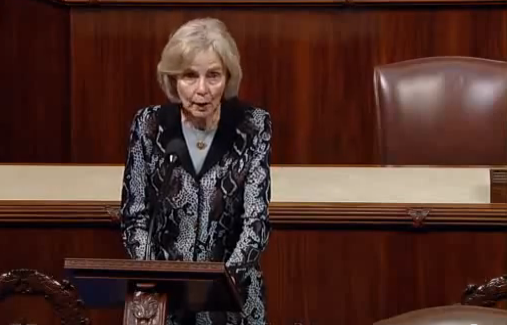 California Congresswoman Lois Capps, along with 22 other Democratic members of the United States House of Representatives co-sponsored, on May 30, a bill aimed at promoting mental health and community safety through gun-control. Dubbed the “Promoting Healthy Minds for Safer Communities Act of 2014,” the bill lays a foundation for stricter background checks for at-risk individuals, and earmarks grant money to be used for research into the relationship between gun violence and mental illness.

“We’ve all seen how a violent incident can bring public attention to the need for gun safety measures,” said Capps, addressing her fellow representatives. She spoke just days after the May 23 mass shooting at UCSB where Elliot Rodger stabbed three people, shot three, and wounded thirteen others–eight of them with gunshots.

In her House address, Capps listed over a dozen prominent and recent mass public shootings, and echoed the cry that is trending around the nation: “Not one more,”she said. “We know that we must keep these weapons out of the hands of violent individuals,” Capps told her Congressional colleagues, “but all too quickly, the attention fades. The drumbeat quiets. And we are left with inaction,” she lamented.

Capps’ speech was a plea for Congress to not let the drumbeat become silent this time. “Not one more tragedy followed by inaction,” Capps said. “I sincerely hope that this time will be different. But it won’t be unless we, in Congress, act,” Capps told the House. Days after Capps appeared before the House, Rep. Mike Thompson, D-Cal., introduced HR 4783 which, on May 30, was referred to the Committee on the Judiciary and the Committee on Energy and Commerce.

The text of the legislation which Capps co-sponsored claims the Act will protect individuals by making the nation’s mental health infrastructure stronger, by furthering the understanding of violence, by sane gun control filters to limit access to firearms for at-risk individuals and by expanding and improving the National Instant Criminal System (NICS)–the nation’s platform used to identify “at-risk” people who try to make firearm purchases.

Gun rights advocates, not surprisingly, see the bill as a ploy to push gun control legislation through Congress. Online public opinion tracking platform, POPVOX, reports that nationally, as of June 6, eighty-nine percent of respondents are opposed to HR 4783. While 11 percent favor it. At the time of this writing, the sample of the poll is 832 people. In California, approval of the bill is 21 percent–ten points higher than the national average.

The POPVOX platform allows respondents to comment on their support, or lack of support, for various pending pieces of legislation. Opponents to HR 4783 say the legislation is “too open-ended” in the powers it grants to the government in determining who does and who does not have the right to bear arms. A former soldier who commented was concerned that a soldier who reported depression to his therapist in confidence over 30 years ago might be precluded from owning a firearm today, though he is mentally stable three decades later. Concerns about contravening constitutional rights and privacy rights appeared frequently in opposition comments.

Supporters of the mental health and gun control bill co-sponsored by six Californian representatives express eagerness to see Congress recognize mental illness as something that “has been neglected for too long.” One referred to the trend in Texas for gun rights activists to walk around carrying semi-automatic rifles in broad view as “radical.” Supporters conveyed weariness at the carnage of recent incidents of mass violence, and they want guns to be strictly controlled. The effects of mental illness are prominent in supporters’ comments.

The aggregated concerns about privacy, the Second Amendment, and the failing mental health system mirror the content of HR 4783. Some key components of the bill, however, had not shown up in the comment section of POPVOX as of this writing. The bill strengthens language about domestic violence, a benefit that will likely find favor with law enforcement, the therapy professions, and women’s rights advocates.

It is perhaps not surprising that national legislation that addresses gun control and mental health originates in California, but California is not the only state whose Democrats co-sponsored the bill. New York, Colorado, Connecticut, Kentucky and seven other states have congressional representatives who also co-sponsored the mental health and gun control bill, HR 4783.