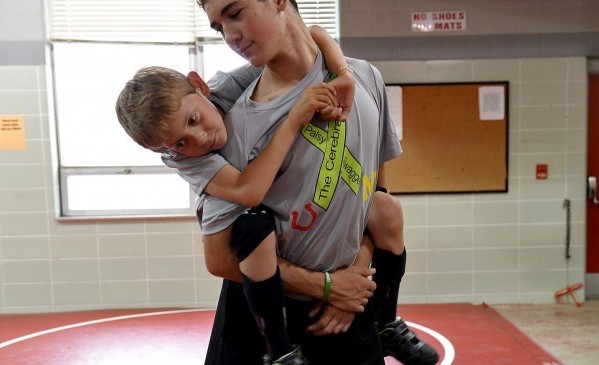 Rain, heat and fatigue could not stop a Michigan teen from finishing a 40-mile trek on foot, all the while carrying his brother on his back. The 155 lb. teenager made the long walk, dubbed the Cerebral Palsy Swagger, while he carried his 50 lb., 7-year-old brother, who cannot walk on his own due to his battle with cerebral palsy, on his back, in hopes of raising awareness about the disease as well as to put a human face on the muscle disorder.

Hunter Gandee, 14, began his walk from the gym at Bedford Junior High School in Temperance, where he attends school, which is close to the Ohio border. Accompanying Hunter, who carried brother Braden Gandee, were their parents, two siblings, school friends of Hunters’, one U of Mich. wrestler and other supporters. They covered 25 miles on Saturday and walked the last 15 miles on Sunday, ending at the University of Michigan in Ann Arbor, where over 100 people waited to celebrate the brothers’ accomplishment.

Braden was born with cerebral palsy, a disorder that affects the nervous system and brain function. In Braden, the disease has affected his motor coordination, muscle tone and reflexes.

On Sunday, Hunter finally made his way up the road that leads to the U of Michigan’s Bahna Wrestling Center. As is tradition for the U’s athletes and personnel before the start of football games, Hunter lifted Braden up so that he could touch the “Go Blue” banner. When he was asked how he felt at the completion of his journey, Braden remarked only that he was “tired,” even though thirty miles into the journey, Braden suffered chafing on his legs, which forced Hunter to make the decision to stop or to keep on going. In addition, Braden suffered from blisters and other minor skin issues due to the heat and the equipment needed to carry him, but he was able to make it through the walk on Hunter’s back instead of in a stroller.

The idea for the Cerebral Palsy Swagger came from a dream had by the boys’ mother, Danielle Gandee, in which Hunter carried his little brother from Temperance to Mackinac in order to raise public awareness of Braden’s condition. After telling Hunter about the dream, he started to think about a way to make his mother’s dream a reality. Walking to Mackinac would have taken two weeks of walking 20 miles each day – time which the Gandees did not have. They settled on the U of Mich. as the right distance for such a walk.

According to Danielle Gandee, Hunter’s determination inspired walkers who struggled along the way. Hunter himself drew inspiration from the others walking alongside of him and from a friend’s phone call, during which he and the group prayed. The walkers also made it a point to stretch along the way when necessary. Hunter and Braden’s father, Sam Gandee, was amazed by the size of the group that followed them along the way and walked with them, some stepping in when other walkers dropped out. Sam Gandee believes that it was Hunter and his friends that led others to finish the walk despite the difficulties they encountered.

Kerragen Gandee, sister to Hunter and Braden, said that her favorite part of the trek was the large crowd of people who waited for the group at the Bahna Center, the end point of the walk.

Sam Gandee related that wrestling has been an important factor in the preparation Hunter made for the walk as well as the relationship between the boys. Braden has been an avid supporter of Hunter’s wrestling, going to meets and keeping score mat side. Hunter said that both he and Braden plan to attend the U of Mich., where Hunter hopes to study bio-engineering and wrestle collegiality.

This is not the first time Hunter has acted to create awareness about Braden’s condition within the community. During March, which is also the month designated to raise awareness for cerebral palsy , Hunter, who is a member of the student council, sold green wristbands to students, making $350.00 for the U of Mich.’s Cerebral Palsy Research Program. “I’m really proud of him,” said Braden.