Carmelo Anthony: Who Will He Choose? 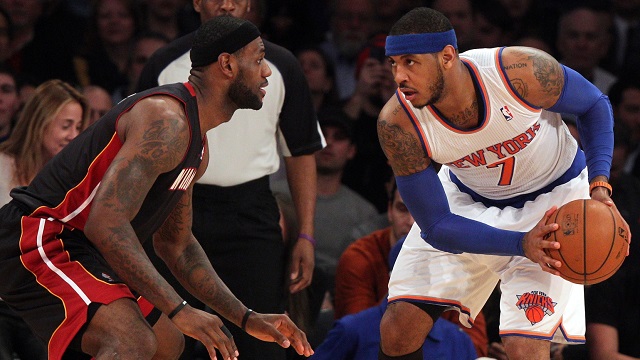 Everyone wants Carmelo Anthony. Until recently, there have been various rumors that the Chicago Bulls, Houston Rockets and Dallas Mavericks all wanted to pursue a deal with Carmelo Anthony of the New York Knicks. Now, Melo has an even bigger decision to make as the Miami Heat are currently making plans to target Anthony this summer in the free agency. As his contract with the Knicks comes to an end, he has until June 23 to notify the franchise whether or not he wants to renew or opt out of his contract. Fans from Chicago, Houston, Dallas, Miami and New York are anxiously awaiting to hear who will Carmelo Anthony choose?

If Melo decides to end his contract early with the Knicks, he will become a free agent this summer and could potentially open up various options with teams in both the Western and Eastern conferences. He has until June 23 to let the New York Knicks know if he wants to leave early or stay. The Heat and other teams are prohibited to even contact Anthony about potential deals until he declares himself as a free agent. There are numerous influences that are affecting his decision.

Phil Jackson, one of the most prestigious coaches in NBA history, is one of the main reasons why Anthony could choose to finish his contract with the Knicks. As the current Knicks president, Jackson insists on keeping Melo on his team and is confident that the Knicks will have a winning team should Carmelo Anthony stay. He could have another five-year contract set up, which could be beneficial for New York as they have more time to rebuild the franchise in hopes for a championship season. In the end, like anyone else, Jackson realizes that Anthony has to make the best decision for himself.

July 1 will be the start of the free agency. Who will Carmelo Anthony choose? If he does choose to leave New York, he will have to decide which offer is the best one for him. Right now, the Miami Heat are clearly expressing that they want him as part of their successful franchise even despite the fact that he has yet to make a decision whether or not to leave his contract early. The Miami Heat may appeal to Melo the most over all the other options and could dangle an offer that he cannot pass up.

The Miami Heat are currently in a 2-1 deficit under the San Antonio Spurs in the NBA Finals but are determined to go for their ‘three-peat’ championship victory. The Big Three, which consist of LeBron James, Dwayne Wade and Chris Bosh may have to extend their Big Three to the Big Four if Melo joins the Heat. In order to get Anthony onto the Heat, several of its players, including James, Wade and Bosh, will have to accept significant pay cuts. This could be a sacrifice that Miami players may have to consider. LeBron James has actually wanted to play alongside with Carmelo Anthony for some time, so this could be the perfect opportunity to make it happen.

Carmelo Anthony is not the only player considering whether to opt into free agency. Coincidentally, James, Wade and Bosh have thought about leaving the Heat and declaring themselves as free agents also but could remain with the team if the Heat get their three-peat this year in the current NBA Finals.

With the start of the free agency being less than a month away, there are many considerations that Carmelo Anthony has to keep in mind. In the end, Melo may not even pick Miami or any of the other team options. He could choose to stay in New York and help the franchise obtain a championship with a new five-year contract. Until then, many fans must anxiously wait to hear who Carmelo Anthony will choose.

3 Responses to "Carmelo Anthony: Who Will He Choose?"