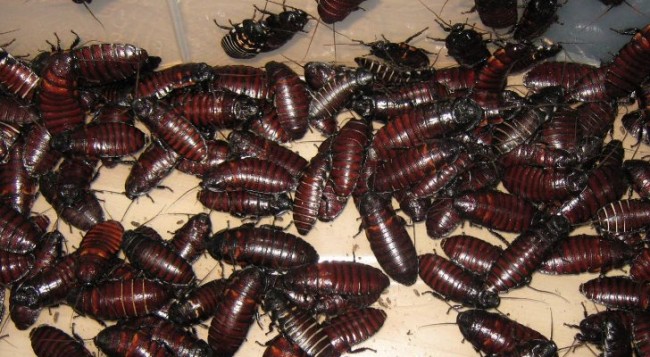 It is being reported that a Chinese woman has revealed she shares her home with at least 100,000 cockroaches that she calls her children. Yuan Meixia, age 37, breeds the vermin in her country forest home, located in the Fujian province, in southeast China. Inside, she has replaced all the doors with silk nets and each crevice has been cemented in order to make sure none of the roaches are able to escape.

She feeds them each day at 6 p.m. by leaving melons, bran and apples for the bigger roaches and bags of glucose for the baby cockroaches, or nymphs as they are called. Yuan explained that they are the most active through the night, both hunting for food and also mating. She said that they mate with each other after they eat and the mating process can last for two hours or more and then they spawn. Each spawning causes over dozens of baby cockroach eggs to be released. After about a month, the nymph eggs hatch, so Yuan has at least 100,000 cockroaches at any time.

Even though Yuan declares she treats the cockroaches like they are her offspring while they are in the process of growing, the way she treats them once they are fully mature is far from motherly. After they are grown, she drowns them and then leaves them out to dry.

However Yuan does not do this for morbid enjoyment. She actually is running a business, as distasteful as it sounds. She sells the dead bugs to a pharmaceutical company. The insects are actually used in traditional Chinese medicines, with the dead cockroaches earning about $45 to $65 per pound with each harvest every two months. She says she makes very good money when she is able to turn in 22 to 44 pounds of dried bugs at one time.

She added that she pampers them when they are alive because besides the regular food she feeds them, she also gives them sugary treats and allows them to rest inside a warm stove whenever they are tired.

Yuan explained that she actually lives at a different house most of the time but goes the cockroach breeding house every single day so she can check up on her babies and make sure they are safe and happy.

Yuan, who is also a pharmacy employee, declared she became motivated to begin raising the bugs after seeing a Chinese television program that was aired in 2013. She stated that she saw other people raising the same kind of roach and they said it could be both medicine and food. So she learned how to breed them and spent over $1,600 to buy 44 pounds of live cockroaches.

She has to maintain a moderate environment for the roaches and use a gas stove in winter and have sprinkling water dripping down the walls through the summer. The roaches are mainly the large winged variety which is very common in the United States.

Yuan has revealed she shares her home with at least 100,000 cockroaches that she calls her children. She breeds the vermin in her country forest home, located in southeast China. Inside, she has replaced all the doors with silk nets and each crevice has been cemented in order to make sure none of the roaches are able to escape.