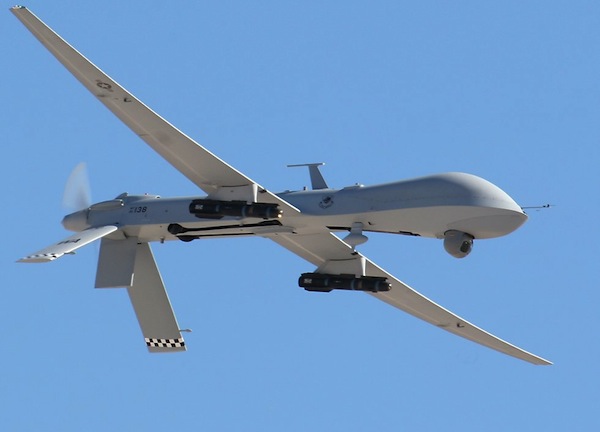 A drone strike in Yemen Friday killed five men suspected of being al Qaeda militants. The attack targeted a car in the southern area of Yemen and all passengers were killed.

The attack reportedly occurred in a mountainous region of al-Saeed in the southern Shabwa province. Suspected al-Qaeda leader, Musaad al-Habashi, was among the men killed according to Yemeni security officials.

Yemen is the main stronghold for the Arabian Peninsula branch of al-Qaeda (AQAP) and is considered one the most dangerous in the world. It has been linked to a number of attempted attacks on the U.S. including a failed attempt to airliner on its way to the U.S. in which the bomber had explosives hidden in his underwear. It also attempted to send mail bombs hidden in toner cartridges on planes headed for the U.S.

The second strike occurred seven hours later, killing 10 suspected-militants. Pakistani security officials said that six missiles were fired at the compound, targeting a building and a truck filled with explosives that were parked outside. According to reports, thousands have fled the area in fear of an all-out military offensive against militants.

According to South Asia Terrorism Portal, a nonprofit organization there were over 2000 deaths between 2005 and 2014 as result of drone attacks in Pakistan. In December, the drone program was suspended to allow peace talks between Islamabad and the Pakistani Taliban.

Prior to suspending the program, a drone strike in Yemen, reportedly hit a wedding convoy of 11 vehicles, killing 12 civilians and injuring 22 others on their way to the groom’s village outside central Yemeni city of Radda. The attack sparked outrage in the area’s citizens, who called for the Yemeni government to put an end to drone strikes in the country. The civilian casualties drew anger from human rights organizations as well, who felt there should be tighter control and regulations over the use of drones.

So far, of the five-suspected militants killed by the drone strike in Yemen, only one has been identified. Since 2002, there have been more than 100 drone attacks directed at suspected al-Qaeda targets in Yemen according to the New America Foundation, a nonprofit organization.