Connecticut Hoarder Discovered Dead Under Weight of Her Own Trash 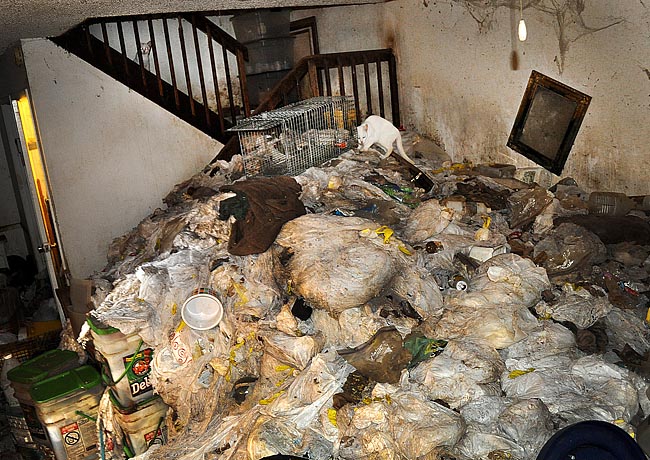 A Connecticut female hoarder was discovered dead in the basement of her house after the first floor caved in under the weight of a horde of her own bottles, newspapers, magazines and all kinds of trash, reported Connecticut state police on Sunday morning. Police investigators were called to perform a welfare check on Beverly Mitchell, in the town of Cheshire, Connecticut, on Thursday after a local postal carrier called them and explained that her mail was beginning to pile up outside the front door of her one story dwelling home on Winslow Road.

After the police arrived, they were unable to find her but established that the house was structurally flawed. They discovered the floors felt soft, so on those conditions, police decided any further searching without the proper equipment was too risky. They proceeded to call in Fire rescue and they contacted both health and building departments along with the Connecticut State Department of Emergency Management.

With all this help, the structure was safeguarded and the search resumed on Friday. However it still was not until Saturday that Mitchell’s body was finally found in the basement under a giant pile of debris from the collapse of the floor in the room above. The preliminary investigation showed the fall-in likely occurred about a week before.

The sergeant explained that it appeared the main floor caved in and all the trash and objects Mitchell had collected for numerous decades beforehand had completely covered her as the floor crashed down to the basement. He said that local mental health professionals had known about Mitchell’s living situation for a number of years and had sent numerous social services teams to attempt to try and offer help for her but each time they were rejected and sent away.

It appeared her death was completely accidental, because there were no signs of any type of criminal activity. It is believed she had been deceased for about seven days before they were called in to investigate, exactly the amount of time from which the floor fell down. When looking at her property from Internet sources, it showed a small home that was mostly hidden behind large trees in a town about 25 miles to the southwest of Hartford, Connecticut.

Since Mitchell was considered a hoarder by the mental health professional in town, there was really no certain pattern to what she decided to keep inside her house. Sgt. O’Donnell said that everything was junk and it was piled to the ceiling in just about every room of the home. There was even trash that was up to a person’s waist in the one room she lived in.

The Connecticut State Medical Examiner’s Office has yet to officially identify Mitchell, so was unable to release any information on what was the actual manner and cause of the woman’s death, a spokesperson from the office stated on Sunday afternoon. Connecticut investigators will continue to look into the incident while Cheshire town officials decide whether or not the house should be torn down.

Mitchell was discovered dead in the basement of her house after the first floor caved in under the weight of a horde of bottles, newspapers, magazines and all sorts of bottles and all kinds of rubbish, reported Connecticut state police on Sunday morning.