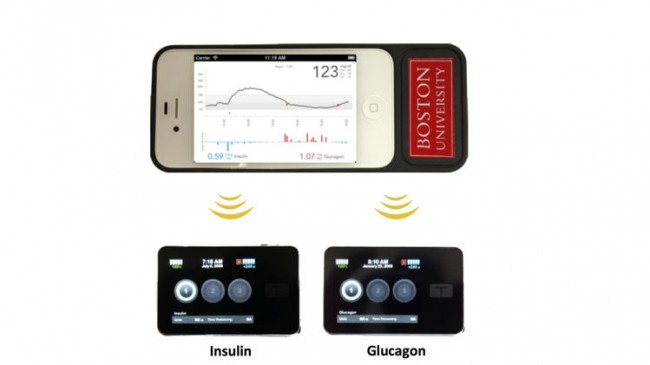 Approximately 29 million Americans have diabetes, and about 5 percent of those have the type 1 version of the disease. Ed Damiano’s 15-year-old son, David, is one of them. Many parents might wish for help with managing the disease, but Damiano is a Boston University associate professor of biomedical engineering. He is part of a research team that has created a bionic pancreas that is an attempt at automatic control of blood sugar in people with type 1 diabetes.

The device was created by researchers at Boston University and Massachusetts General Hospital, and consists of an insulin pump, a glucagon pump, a glucose monitor implanted under the skin of the abdomen and a smart phone. The device was made specifically for the iPhone 4, using a low-energy Bluetooth signal to let the components of the device communicate with each other.

The bionic pancreas is similar to typical insulin pumps worn by many diabetic patients, but the new device takes things a step further. The sophisticated iPhone app connects wirelessly to a blood sugar monitor. The app analyzes the data from the monitor, which checks the blood every five minutes, and wirelessly sends signals to two pumps, also similar to what many patients wear to inject themselves with insulin. However, in this case, one pump contains insulin and one contains glucagon, a hormone that raises blood sugar when it gets too low. With the new device this all happens automatically.

Several other groups in the U.S. and throughout the world are testing similar systems, but Damiano’s is one of the most advanced. For instance it is one of the few that uses both glucagon and insulin.

The bionic pancreas was tested for five days on a group of 52 people with type 1 diabetes, 32 adolescents and 20 adults under controlled environments. The adult study participants were monitored in a hotel room and told to eat however they wanted. The adolescents were  tested at a summer camp. Researchers kept watch on the participants’ blood sugar levels and stood by in case of emergency.

Research results were published in the New England Journal of Medicine. The participants all had healthier blood sugar levels when using the bionic pancreas than when they their standard control methods were used. Dr. Steven Russell of Massachusetts General Hospital said that the system was able to bring every single one of the participants’ blood sugar levels into the range that reduces complications.

Approval has been given for additional tests, which will start today, this time on adults and adolescent volunteers who will independently use the system for 11 days. Ten patients will wear the device in real-life conditions, working and living normally without medical supervision. Their blood sugar readings will be monitored at the hospital, having been sent wirelessly via the iPhone.

In addition to further testing, price is a consideration before the bionic pancreas is widely adopted. Right now the glucagon alone costs $160 per day. Further testing is also being done to try to simplify the device by combining the two pumps into one, as right now the system is a bit cumbersome. A glucose monitor about the size of a quarter is implanted under the skin of the abdomen and connects with an external insulin pump about the size of a phone that is stuck to the abdomen with adhesive. Glucagon is delivered by a second pump, with all controlled by the iPhone.

The pancreas of a diabetic produces little to no insulin, which is a hormone necessary to regulate blood sugar. High glucose levels can damage tiny blood vessels, possibly leading to heart disease, kidney failure, stroke or blindness. Some people must have toes, feet or legs amputated. 71,000 people per year die.

Type 2 diabetes is often caused by poor diet and lack of exercise, and accounts for most cases in the U.S. Type 1 is an autoimmune disease in which the body attacks its own pancreatic cells, the producers of insulin, that are required to process sugar properly.

For people with type 1 diabetes, managing their disease is a 24-hour a day task that revolves around blood sugar testing and monitoring food intake. Some study volunteers were reluctant to give up the new device. One said it took her worries about her blood sugar off her hands during the time she was able to test it. Another said it was “extremely liberating.” While the bionic pancreas is not a cure for diabetes, is may prove to be a huge step forward attempting to controlling it.