Dinosaurs Can Do Thermoregulation to a Point 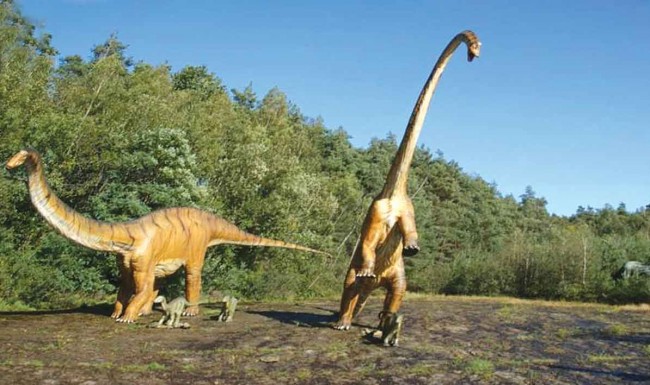 A long-standing question about dinosaurs is whether they are more bird-like or reptilian-like. This question relates to thermoregulation in that birds can regulate their temperature and reptiles cannot. This newly reported study has suggested that dinosaurs should be considered as fitting in somewhere in between. Dinosaurs were shown to be able to regulate their own body temperature, but only to a certain point, and not to the degree of birds and mammals.

In the evolution of animals, amphibians are thought to have evolved before reptiles and then the latest stage was the evolution of birds and mammals. Both birds and mammals are put in this latest category because they can regulate their body temperature, and are said to be warm-blooded. Amphibians and reptiles are cold-blooded and need to move into the sun to get warm or shade to cool down. The evolutionary transition between the reptilian era and the era of birds and mammals was based on the evolution of the brain and nervous system that allowed for regulation of internal body temperature. The brains of dinosaurs are very small relative to body size and the brains of mammals are very large relative to body size. The question of thermoregulation in dinosaurs is related to the understanding of how the brain evolved in animals.

The recent study on the regulation of body temperature in dinosaurs was published in Science by a team from the University of New Mexico. The lead author was Dr. John Grady. The authors of this study suggested that the modern idea of a dichotomy of animals being either cold-blooded or warm-blooded may be overly simplistic. This means that there actually could be a group of animals have the ability to regulate their own body temperatures to some degree.

The scientific term for animals that can do thermoregulation to a degree is mesoderms. The prefix meso means middle. Mesoderms have a metabolism that allows regulation of body temperature to some point, but not constantly, as is the case with birds and mammals. For example, tuna are considered to be mesoderms.

The methodology of the reported study included looking at many types of animals and recording their growth rates as well as metabolic rates. They were able to determine a continuum from cold-blooded animals to warm-blooded animals. When they plotted dinosaurs on this continuum, they found they were in the middle of the scale. The authors termed thermoregulation ability in this middle region of the continuum as mesothermy.

It has been reported that Dr. Grady has indicated where these studies will go in the future. He is planning on studying dinosaur fossils in extreme temperature environments, like Alaska, to study exaggerated differences in types of thermoregulation.

According to reports, being able to do thermoregulation would have likely given dinosaurs some advantages compared to other animals. Dinosaurs are thought to have lived from about 165 million years ago to about 65 million years ago, which is when they became extinct. This is considered to be a long time in terms of more recent evolutionary eras and the ability to do thermoregulation, even to a point, would have likely been an advantage that contributed to their evolutionary success.

3 Responses to "Dinosaurs Can Do Thermoregulation to a Point"