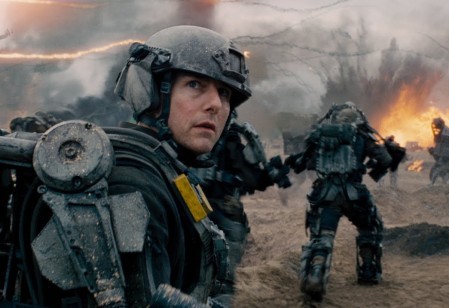 Reading the various reviews and thoughts about Edge of Tomorrow apparently only one or two critics have recognised the film for what it is; a video game movie sans video game. Word is that the film is fast paced, entertaining, “original” and looks to be the fun film to see this summer in terms of blockbusters.

Searching through the many excited write ups of the Tom Cruise, Emily Blunt vehicle several themes are mentioned, analyzed, and applauded. Very few though, can get past the apparent Groundhog Day scenario; missing completely the reality behind the rave reviews from most critics.

What is this reality? The simple answer is that the film is a cinematic live action video game not based on an existing original game. In other words Edge of Tomorrow is a gaming movie sans an original game of origin. While this may sound confusing, stop and think for a moment about how many movies Hollywood have based on popular, iconic, video games. Films such as Resident Evil, Doom, Silent Hill, House of the Dead, et al, have all been adapted from these wildly popular, or cult favorite, video games with mixed success.

Both the gaming industry and Hollywood have been trying for some time to catch “lightning in a bottle” with a film based upon a game that holds a special place in the hearts of gamers. The mixture of results, have proven that the movie makers really haven’t got a clue till now on how to go about it. Unlike Hollywood, various gaming companies have had much more success in this area. Developing games that were so cinematic in nature that the more hardcore gamers did not like them.

The plot of Edge of Tomorrow has Tom Cruise as the initially non combat ready officer who is sent to the French front to fight an onslaught of aliens. After killing one of the bigger creatures, which results in his being coated in its blood, Cruise’s character dies and then “wakes up” right back at the moment that he first arrives to be told he will be going to France.

This does not happen just once or twice, but repeatedly. Initially he attempts to tell everyone what is happening. After saving Emily Blunt’s character, who realizes that Cruise is telling the truth, he is told by her character to find her the next time it happens. The film is based around this “time loop,” as many critics have called it and watching the trailer shows a few comedic moments. One features Cruise in the role of trusty steed with a broken leg and the camera focusses on Blunt who cocks her weapon and tells him to find her again when he wakes up as he pleads that he is fine.

Another thing that critics have been quick to point out is that Cruise’s character gets smarter and better at defeating the aliens each time he returns. This is all fascinating and it also proves the gaming point brilliantly. Anyone who has played any sort of video game, whether it be a platformer like Mario Bros or a cinematic, and epic game like The Last of Us or any one of the Final Fantasy games this mechanic, or device, is referred to as re-spawning. First person shooters such as Battlefield or CoD use the same technique also.

Granted the film is based on a “light” novel titled All You Need Is Kill by Japanese author Hiroshi Sakurazaka so apparently the device is in the science fiction book. It would not be surprising at all, however, if this time loop was influenced by the act of re-spawning in video games.

Even if Edge of Tomorrow is not intentionally a video game movie sans a video game origin it certainly resembles one enough to guarantee a pretty enthusiastic response from a certain amount of gamers. Even if most reviewers have not made the connection, the younger and more “with-it” audience members surely have. All that is left now, is for Hollywood to make a video game based on the movie, which they have certainly done before. The film opens in theatres across the country on June 6. Those interested in the film can watch the trailer below.

One Response to "Edge of Tomorrow: a Video Game Movie Sans Video Game"