By Amena Chaudhri on June 22, 2014Comments Off on FIFA World Cup Has First Water Break Ever 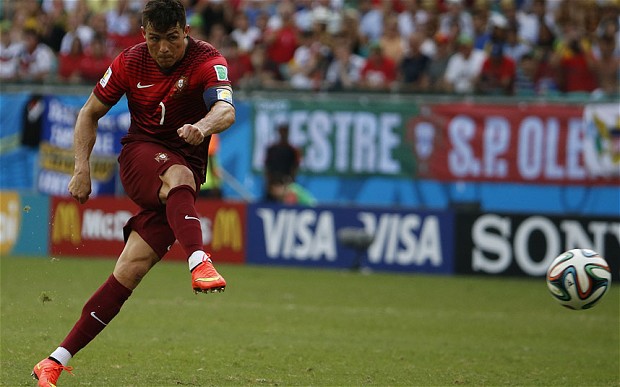 The FIFA World Cup had a first, as the referee called a time out for players to take the first ever water break in the history of the World Cup. This occurred during the USA-Portugal game. Fans and announcers were confused and surprised with the call, but the players were not complaining. In the scorching heat that some of these games are taking place in, it is not only necessary for the players to have water breaks for their health and performance, but it is also now a court law.

On Friday, a court in Brazil made the order for FIFA to include mandatory breaks for the players during World Cup games when playing in extreme temperatures. The court issued a saying that required breaks to take place at or around the 30 minute mark of playing time during the FIFA World Cup matches. These breaks should last about 30 seconds and there should be one break per half. The court reiterated several times how vital it is for the players to stay hydrated while playing in these games.

These water breaks become required as soon as temperatures are at or about 89.6 degrees Fahrenheit, 32 degrees Celsius. This rule takes into account the time of day, cloudiness, wind, rain, humidity, and location. The ruling was finally agreed upon after two hours of negotiating took place which involved FIFA prosecutors as well as local prosecutors.

FIFA’s organization stated how it had previously issued the recommendation for water breaks in extreme weather conditions and how the labor court had simply established the existing procedures. However, the labor court claims that FIFA never had any intention to impose the water breaks during the World Cup games. The lack of water breaks made it necessary for the court to intervene. FIFA has also stated how there has not been a single match in the World Cup so far with temperatures reaching above 82.4 degrees Fahrenheit, 28 degrees Celsius, according to the heat stress index. Due to the temperatures of today’s game of USA vs. Portugal, it was required for FIFA to have its first water break ever in World Cup history.

Labor court prosecutors wanted the rule to be that water breaks would be required once temperatures reached 86 degrees Fahrenheit, 30 degrees Celsius, however the judge went with the FIFA’s request as there was no proof showing the difference would affect the health of the players. FIFA World Cup was pleased with the judge’s decision to favor with the organization’s rule. Labor court enforcers are taking this new ruling so seriously that an issue of $90 thousand must be paid by FIFA for every match in which the rule is not imposed. The federal court also insisted how the world governing body of soccer is in charge of checking the temperature during games by using equipment that has been pre-certified. FIFA has agreed to respect the court’s decision in its entirety.

The players’ union of Brazil initially requested that FIFA change game times for all matches that were scheduled to begin at 1 pm, as this was subjecting athletes to the risk of playing in extreme heat. FIFA stated prior to the court’s ruling that it would not alter the game times or enforce water breaks it had spent approximately two years working to create the tournament’s schedule. The lack of water breaks in the FIFA World Cup were partly due to the desire to adhere to the tournament’s strict schedule. FIFA stated that while creating the schedule, the health of the players was always considered.

The water break during the USA-Portugal match was an easy decision. Reporters covering the game even said that the break should have been taken earlier, as it was not called until close to the 40 minute mark. The break, lasting maybe no more than 30 seconds, was a call that everyone on the field agreed with. Today marked the FIFA World Cup having its first water break ever in World Cup history, and it will not be the last if temperatures continue the way they have in Brazil.