Gangs in New York: Over 100 Arrested in Early-Morning Raids 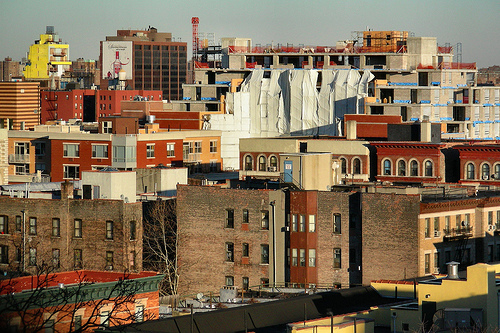 As the early-morning dawn broke in New York yesterday police raided two public housing developments and arrested over 100 Harlem gang members. Their ages ranged from 15 to 30, and they were indicted following a four-year-long turf war and the murders of two 18-year-olds in 2011.

NYPD Commissioner William Bratton called the city’s gang violence “feuds over nothing” that can last for decades. All 103 indicted are from three gangs that operate in Harlem: 3Staccs, Money Avenue, and the Make It Happen Boys. The arrests were made near 125th St in Harlem, a popular transport hub in New York City that has recently shown signs of gentrification.

The arrests took place in the Manhattanville and General Grant projects and other buildings nearby. The charges the accused face include first-degree conspiracy and attempted murder, with a total of 145 counts. Twenty-three suspects have yet to be arrested, according to Manhattan district attorney Cyrus R. Vance, Jr. They all face up to 25 years in prison if found guilty.

The investigations leading up to the largest gang bust in New York City history began in 2010. Over 1 million social media pages were examined, as well as thousands of phone calls made by gang members in prison and elsewhere.

The turf wars and the recent raids go back to the murder of Tayshana Murphy, an 18-year-old high school senior who appeared to be on her way to a promising career in basketball. She was found dead in her hallway on Sept. 11 after trying to get away from a gunman who shot her three times. Her brother, alleged to belong to the 3Staccs gang, was indicted in Ms. Murphy’s murder investigation.

The second murder occurred on Dec. 30. Walter Sumter, 18, was shot once in the chest when leaving a party just after midnight. Authorities believed that his murder might have been in retaliation for the murder of Ms. Murphy, whose brother was also questioned Sumter’s murder. Sumter was believed to have gang affiliations but was said to be trying to change for the better. Both victims were well liked and seen to be filled with promise for their futures, only to have their lives cut short by senseless rivalries.

Gangs often recruit youth in their preteens, which helps explain why some of those arrested following yesterday’s raids are just 15 years old. In recent years, authorities in New York have been trying to crack down on gang violence, especially in Brooklyn, Harlem and the Bronx. Despite the decrease in crime in the city, shootings have increased and continue to rise.

It is not clear which major gangs 3 Staccs, Money Avenue, and the Make It Happen Boys are affiliated with. Confrontations in housing projects are common, and authorities say drugs are not the culprits of at least these three gangs’ conflicts. Alongside Stop and Frisk, raids on suspected gang members and arrests such as the recent large bust are one tactic the city of New York uses to decrease crime that could turn deadly.

One Response to "Gangs in New York: Over 100 Arrested in Early-Morning Raids"