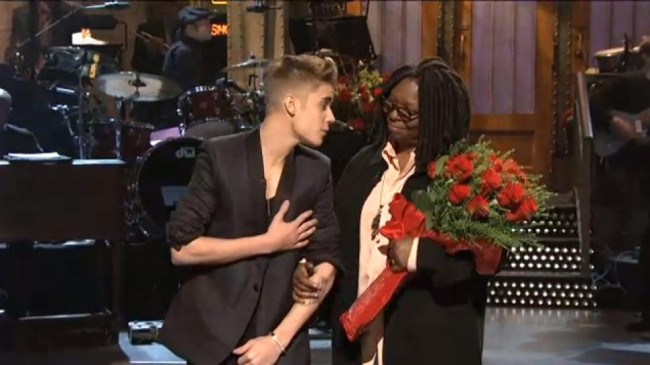 Justin Bieber has gained a strong supporter with his recent controversy. On an episode of The View that aired on Wednesday morning, host and moderator Whoopi Goldberg shocked the panel and the viewing audience by stating she believed the young singer should get a pass over his usage of the “N-word”. Her reasoning is that as Bieber grew up in Canada, he would not be privy to the knowledge of the “power” of the word in America and that it could and has hurt others.

As she introduced the set-up to the conversation, the 58-year-old said that he was “too young” to understand the strength of the word back then and added that “he’s Canadian” as part of the reason. The audience groaned almost immediately and co-host Sherri Shepherd attempted to interject. Goldberg stated that she had proof from personal experience to back her up.

“N****r doesn’t mean anything in Canada,” she expressed.

Shepherd retorted back, “Well, what does it mean; groceries?”

Goldberg shared that she worked on a movie in Canada sometime last year. The writer of the film, “a young and lovely Canadian woman,” initially wrote dialogue for her character in the film that she felt “no one would ever say”.

“Black Canadians and black Americans are two groups of separate people,” Goldberg continued. “I went to the director and said, “What is this?” He said, “Oh, she lives here.” She [doesn’t] get what we [as black people] are talking about.”

Goldberg stated that adjustments were made to the script. “That’s just the way it is,” she said.

Bieber’s manager, Scooter Braun, discovered him while looking through YouTube videos for new artists. Although he was born and raised in Canada, he was flown to Atlanta at age 13 to begin working on demos for his first EP, My World. R&B singer Usher, who is African-American, began working with Bieber approximately one week after he arrived in America.

Other View co-hosts immediately disagreed with the statement Goldberg gave. Shepherd added that no matter where the word was said, “People don’t like it if you throw it around.”

“I don’t think Canadians throw it around,” Goldberg responded, adding that the word turns up in many songs by many American musicians.

“When you’re 15 and you’re someplace where that’s not a word that is associated with people that are of color,” she continued, “They weren’t calling them that.”

“And that’s why he apologized,” Goldberg answered back.

Following an outcry from viewers, The Color Purple star gave another short statement on Twitter to express that history between Canada and America is greatly different.

“I was saying that the N-word is not something that lived in Canada the way it lived here,” she explained.

Many African-American friends of Bieber have stood by him since the video leaks. Boxers Floyd Mayweather and Mike Tyson, as well as rapper Lil Wayne have spoken up in his defense, saying that they are still close with the 19-year-old. Bieber’s mentor, Usher, was confronted by a TMZ camera man earlier in the week, but refused to comment and actually ran away from the photographer.

Page Six of the New York Post recently reported that there may be more video clips of Bieber coming soon. As for the singer himself, it is said he is currently vacationing in Mexico since the controversy broke. He has been posting verses from the Bible regarding the power of forgiveness since his released his apology.

2 Responses to "Justin Bieber Is Defended by Whoopi Goldberg [Video]"