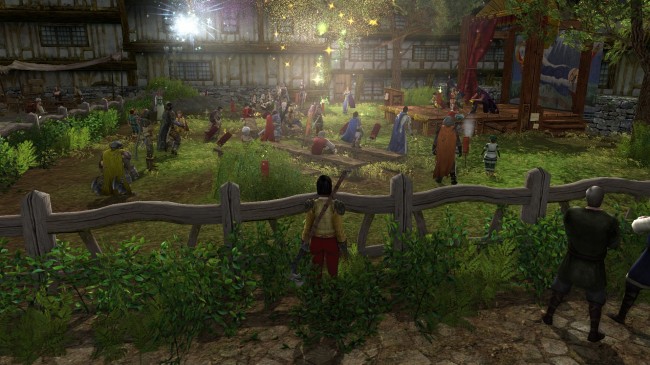 As the evolution of the massively multiplayer online games (MMORPG or simply MMO) progressed from early text versions called MUDs to graphical environments, two mechanics designed to present the gameworld to the players has arisen. One is known as ‘instanced’ where the transfer from one area of the gameworld to another is accomplished through transitional loading screens. The second is simply known as ‘open world.’ There are no loading screens; the gameworld is presented as one continuous environment, where some form of fast travel is highly desirable.

What is meant by the term ‘instanced’ is not the dungeons that are created in nearly all of the MMOs currently in play, where a private party enters an instance or dungeon. This is a normal thing in MMORPG gaming. The bosses are tougher, the rewards are higher and in many cases, it represents the end of a quest storyline. For example, taking on a quest line in Lord of the Rings Online, such as the Bree bandits ends in a dungeoned instance where the players encounter the final boss, the leader of the bandits.

In the case of the entire gameworld being a series of instanced zones as opposed to one huge environment where there are no loading screens, players must load into the different zones. An example of this is The Secret World. Every zone of the world, be it dungeon, social hub, or open environment must be loaded in. The Secret World cleverly masks this as having to use gateways to access the different areas of most of the gameworld. However, crossing directly between environments such as Kingsmouth and Blue Mountain necessitates a loading screen.

Examples of a gameworld being entirely open world with no loading screen between zones include World of Warcraft, Firefall, and Lord of the Rings Online to list just a few, and most recently The Elder Scrolls Online. This type of gameplay is particularly immersible because of the danger of entering areas where the mobs (creatures and such) are much higher than the player. Some form of faster travel than by foot is pretty much essential in traveling across these worlds. Known collectively as ‘mounts’, they range from the horses—both player owned and in the public transit system—of Lord of the Rings Online to the gliders, light ground vehicles and dropships of Firefall. World of Warcraft allows the players access to both ground and flying mounts.

However, even the majority of the so-called open world MMOs makes use of loading screens in some form. In the case of LOTRO, it’s map travel, which instantly whisks the player from one location to another. The same for the Wayshrines of TESO. Recovering from player death also involves loading screen mechanics in many MMOs.

A new MMORPG mechanic is making a popular resurgence: open world dungeons or ‘world bosses’ where players take on powerful creatures en masse. Any player in the vicinity of one of these open world instances may participate and often is accompanied by what is known as ‘open tap’, whereby if the player gets a hit in, he or she will share in the rewards. Defiance, Guild Wars 2, Rift, Firefall and The Elder Scrolls Online are some of the MMOs that employ this mechanic.

In closing, the issue of open world MMOs versus instanced MMOs becomes a matter of individual choice for the player. For some, they could not care any less whether a chosen MMORPG is open world or instanced. For them it is all about the genre and individual game. Others tend to gravitate to open world MMOs and MMORPG shooters for the increased immersion factor. There are many more MMORPGs than the ones listed in this article that employ varying mixes of open world and instanced mechanics.