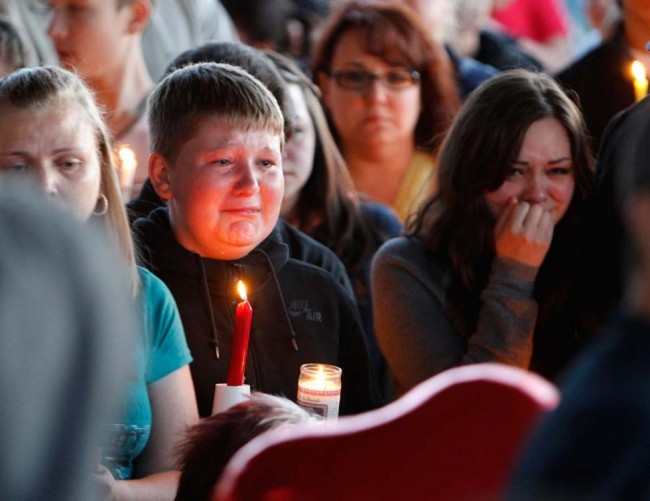 A shooting near Portland OR, with one student death and injuries suffered by both students and teachers, challenges the stereotype incurred by TV shows such as Portlandia, which depicts Portland as a liberal utopia. Portlandia‘s version of Portland is light and witty, featuring people who travel all the way to a farm to check the treatment of an organic chicken before they eat it, the mayor as a happy-go-lucky Kyle MacLachlan sitting at his desk on a yoga ball, and a couple who is obsessed with pickling everything they come across (according to the latest hyper-liberal fad that pickling items is better for your health).

Despite Portland’s reputation as a happy-go-lucky place where young people go to retire, there are very relaxed gun laws, stemming from Oregon’s historical positioning on gun control, which involves almost no government supervision. As long as someone is not or has not been a convicted felon and is over 21 years old, he or she can walk into any firearm store and buy a gun. These relaxed gun laws could have had fatal consequences for the Troutdale School District, located near Portland, OR. The school is one of the largest public schools in Oregon. During the shooting, a singular gunman entered the school around 8:00 in the morning, killed one student, and injured a teacher and several other students. Beyond this shooting, Portland Public Schools have also been dealing with one of the biggest abduction cases up to this date. Kyron Horman is a Portland child who has been missing since June 4, 2010. There has been a large effort to track him down, with a website dedicated to his cause. Portland’s reputation as a liberal utopia seems to be challenged by these events.

Both Troutdale and Portland school districts have attempted to combat these nefarious activities through increasing school security, with prompting from the Department of Homeland Security. The Oregonian remarks: “George Weatheroy, who is in charge of the district’s security, said officials have made it a policy to secure all the perimeter doors except for the main entrances.” Weatheroy also commented, “We constantly re-evaluate our practices.” However, tightening school security may not get at the crux of the real issue.

With such a laissez faire gun law policy in a city with over 600,000 people, the shooting near Portland OR and other violent activities begs the question on a national scale: how are children guaranteed to be safe? This is displayed by the Troutdale shooting near Portland OR. Obama commented on the issue of gun control from a national viewpoint, “Our levels of gun violence are off the charts. There’s no advanced, developed country on Earth who would put up with this.” He also remarked that as a parent, the idea that gun violence is a norm in the United States terrifies him.

This shooting near Portland OR counts as the 74th instance of large-scale gun violence in schools since the massacre at Sandy Hook Elementary Schools in Newton, Connecticut in 2012. It serves as a grim warning of the danger that easy-access to guns has for the citizens of the United States. Portland’s reputation as a liberal utopia seems like a dim reminder of the past, revived by the witty TV show Portlandia. Meanwhile, Obama has been struggling to pass tighter gun restriction laws in congress. Sadly, up to this point, these efforts have been to no avail.